I’ve been reading some books about the American Revolution recently, including “The British Are Coming” (the war up to Princeton 1777) and “Valiant Ambition” (George Washington and Benedict Arnold). It stirred up some thoughts I’ve had about how to rate American troops during this war. But first, let’s look at the battles that George Washington fought.
His army fought 12 battles, 10 of them in the first two years. There were two ties, 6 American defeats (1 a disaster), 4 British defeats (1 a crushing disaster). Both ties were tonics for American morale and some still claim them as victories. (Some may dispute Kips Bay being on this list since the American militia routed under naval bombardment before British troops landed from their boats. A furious Washington did try to rally the troops, having to be led away by his staff when it became clear the troops would not stand. Some others may dispute Fort Washington being on the list. But the buck stopped with him and he was in overall charge when this disaster hit.)
After his first flurry of battles in 1776 and early 1777, Washington tended to avoid major battles with British forces. Two of his early battles nearly ended with the destruction of his army, which would have been fatal to the American cause. His escape from Brooklyn Heights in the face of the Royal Navy and his flank march around Cornwallis after Assunpink Creek were skillful and most important, lucky. Washington himself had close calls at Kips Bay and Princeton. He curbed his aggressive instincts and highly risky moves. Instead, he depended on foreign assistance and the deepening unpopularity of the war in Britain to undermine the British position. The slow strangulation of the American economy by the Royal Navy’s blockade combined with the inability of the toothless Continental Congress to properly pay and supply the army made it a race to the bottom between both sides. Assailed by France, Spain and the Netherlands, Yorktown was the final blow.
The crushing victory at Yorktown could not have been achieved without the French. Without French troops nearly doubling the size of his army, the British would not have been hiding behind fortifications. They would have been out seeking battle. Cornwallis lost the option to sail away to safety once the French navy managed to win an extremely rare victory against the Royal Navy. Instead, he was trapped and forced to surrender his entire army, ending any real hope of Britain salvaging any territory from the 13 colonies. Britain continued for another couple years trying to hold her own against the European foes. The fighting in America dwindled to nasty raids between loyalists/Tories and patriots/Whigs.
Washington’s military career was crowned by his quashing of the attempted coup of the Newburgh conspiracy, and then retiring and demobilizing his army. Horatio Gates had tried to supplant Washington as the leading general. He then chaired the seditious Newburgh meeting, suggesting what he would have done if he had usurped Washington’s command and managed to beat the British. One can only speculate what Benedict Arnold would have perpetrated at war’s end had he had not deserted to the British.
The regular army Washington led went through three distinct stages. In 1776/early 1777 the Continentals enlisted for one year, some being induced to stay on for a few months after, some re-enlisting for the next phase, many heading home. These troops were not on a par with British regulars. They were brave enough, but poorly trained and equipped. Washington could depend on them to serve during the term of enlistment, whereas militia came and went on their own whim, driving Washington to distraction. He wanted an American version of the British regular army. A number of American politicians feared such an army would lead to military dictatorship a la Oliver Cromwell. They obstructed the formation of this regular army.
The army of later 1777 had signed up for 3 years or the duration of the war and were somewhat better trained than the first group. Washington didn’t have to pull a rabbit out of his hat at the end of the year to keep the force from dissolving (as he was forced to in late 1776). During the winter of 1777-1778 Steuben taught the Continentals to effectively maneuver on the field of battle and how to use their bayonets as weapons. Finally commanding troops that could go toe to toe with British regulars, Washington only fought one battle and a siege in the next four years. He didn’t want to squander such a precious resource.
OK, digression over and on to rating Continental troops. I will use the morale/training system from the fine old set of rules, Loose Files and American Scramble, laid out below. 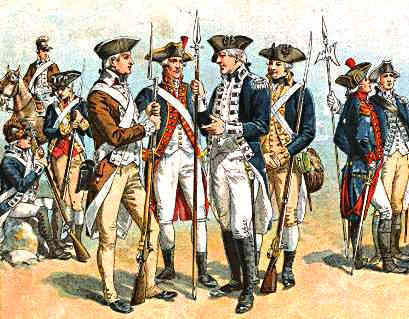 Unusually well uniformed Continentals
For the early fights around Boston, I would rate British line as 3rd rate. Urban’s “Fusiliers” said the troops were green and had not drilled, being cooped up in Boston for months. Most of the flank companies (grenadiers and light infantry) had recently been roughly handled on the retreat from Lexington. Also, they should move as Hessians since Howe's reforms were in the future. I would rate the militia at Bunker Hill as 3rd rate, since the weak-hearted had run away before the battle started and those still around were up for a fight. The militia artillery at Bunker Hill is 5th or at best 4th rate, based on their performance. For the rest of the war, American Continental artillery should be 2nd rate.
I think the Continentals of 1775-1776 should be 3rd rate, with picked troops like light infantry 2nd rate. They should march as Hessians. Though they marched faster to and from the battlefield, being less encumbered, they were not able to maneuver in the presence of the enemy. I think this the simplest way to show this.
The Continentals of 1777 should be a mix of 2nd and 3rd rate. They should march as Hessians, for the reasons stated above. After the hard winter of 1777-78, and Steuben’s reforms, they should basically rate as British regulars, mostly 2nd rate with picked troops 1st rate. Newly raised regulars would be 3rd rate. All should move at a good clip, faster than the Hessians. Late period Continentals should be treated as a precious resource, with serious consequences for heavy losses among them.
My take on Indian warriors is that if they are a majority of the force and defending their tribal homelands, they count as motivated. Fighting in the woods should see them as tough opponents. If the warriors are a minority of the Crown forces, assume they are along for plunder and not interested in being cannon fodder. Consider them unmotivated.
This last is a case of semantics, replacing the original design which deemed Indians commanded by Europeans 4th rate, otherwise 5th rate. If you prefer the earlier rationale, consider Joseph Brant as being a European commander. He was better educated and more literate than most of the militia officers he faced. And he was an effective bush tactician.
The Loose Files and American Scramble rules can be found here.
Posted by vtsaogames at 10:15 AM