The last Fencible game of 2018 was the 1759 battle of the , using Keith Flint’s Simple Seven Years War Rules, a work in progress. I took the role of the French Montcalm, seconded by Andrew in charge of the Indians and militia on the right flank. Jay took the part of the British Wolfe. We played slowly, since the rules are new to me and newer still to Jay and Andrew. Also, I printed the first version of the rules while Jay had the new version. This caused confusion until the problem was detected. I must delete the old version from my files. Because I didn’t use the small lamp with a slight blue tint, the game mat looks much browner in the photos than it should. I must remember to use that lamp in the future. Ah, the joys of digital cameras.

My final excuse: since the scenario is a work in progress, I decided to do exactly what Montcalm did and attack the British promptly, to see if I got the same result.

The left shows my unimpressive representation of the stunning escarpment along the Saint Laurence River. The wooded areas on the right represent the gentle downhill from the Plains. 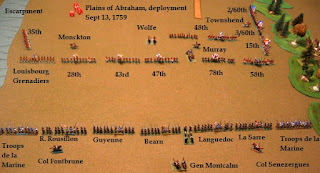 All non-brigaded units were treated as out of command, needing 4+ on a die roll to advance towards the enemy (or their side of the table). This cooled the flanks down. We got the initiative and made the British move first. They stood. We advanced and then fired first, not that much of an advantage during the first exchange of shots. Markers show the number of hits each unit has taken.

On the next two turns the British gained the initiative and made us move first, so they could fire first. Once units were close to being weakened, this hurt us. Red markers show weakened units, yellow markers show units with bad morale. Each marker counts as half a unit routed towards that army’s breakpoint. The French breakpoint was 6, the British 7. Hmm, I did fuzzy math. They should both be 7. Next time. 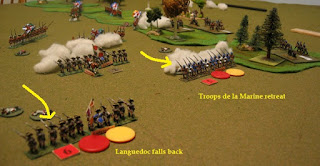 After the second turn we broke for dinner, accompanied by the fine wine Andrew had brought. Jay brought a bottle too, but that will wait for next time.
The third turn saw the French front line savaged by British musket fire. We also realized that we had been making some mistakes with the new version of the rules and began applying disorder hits for seeing friends in bad morale. The French line would have been in even worse shape if we had done this from the start.

Also, the inferior morale rating on most French regulars (they had lots of drafted militia) made it harder to rally them. 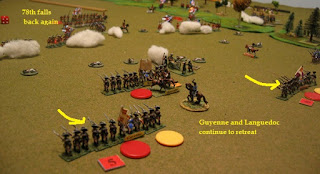 Andrew's skirmishers caused some damage to the redcoats on our right. 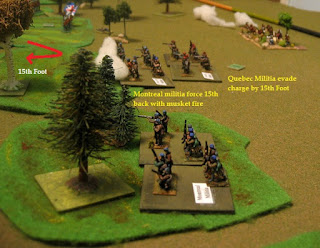 It was for naught as French morale collapsed at the end of the 3rd turn, with two battalions routed, 4 weakened and with bad morale. Only the weakened battalion and Montcalm were still in line. Everyone else had given way. 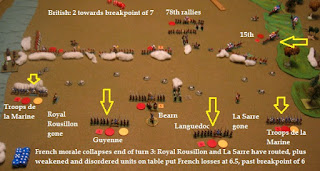 I was pleased that following Montcalm’s tactics had given the same result, with the exception that no officers were hit. In the actual battle all three high ranking French officers were killed, Wolfe died and one of his three brigadiers was badly wounded.

We played three turns in about 90 minutes. I attribute the slow speed to using a new version of new rules, the foul up about which version we were using and the effect of wine on post dinner play. Everyone liked the game. This most European of the French and Indian War battles was quite a treat for the eyes. We should play some actual Seven Years War battles too, since we also have Prussians, Russians, Austrians and some Bavarians.

The scenario right now heavily favors the British, which seems right. They did stomp the French. To balance the scenario perhaps ’s force (1 regular, 1 inferior light cavalry and 3 militia) arriving on turn 4 or 5 behind the British should be included. Counting them towards the French breakpoint would increase the breakpoint to 9. This might well be too much. I hope to tinker with this, although some games with our usual Bloody Big Battles beckons too. I recently received a scenario for the 1808 battle of Bailen. So many battles, such little time.

We played a game of the 1755 Battle of the Monongahela, better known as Braddock’s Defeat last Thursday. We used Keith Flint’s new work-in-progress Simple Seven Years War Rules. These are designed for the European theaters of that war but I suspected with properly rated troops they would work for the conflict on this side of the pond called the French and Indian War (at least below the 49th parallel). The Monongahela is my acid test for rules in this period. The British were shot up and routed in that battle. If they have a rough time in the game, the rules are doing something right. Our figures were 15mm as usual. All of the British and Indians were Rick’s, augmented with my Canadian Troops de la Marine regulars and militia. The game sees a force of line infantry with a few guns against a all-light infantry force in deep woods, without a single clearing. The underbrush had been burnt off since it was an Indian hunting ground. Braddock decreed that the Foot regiments should have another company of grenadiers. I figure decreeing them that wasn’t the same thing as having twice as many elites, hence the “grenadier” designation in the photos.

Bill opted to play the British General Braddock. I played French Captain Beaujeu with Rick as Pontiac, leading my right flank. The British column below has just collided with the French (off camera to the left). 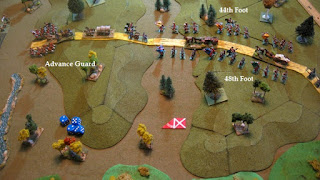 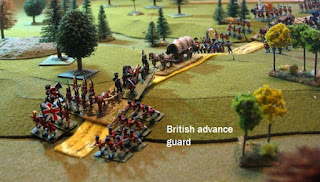 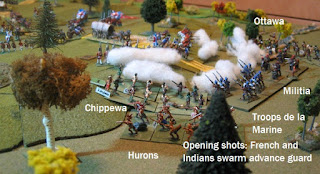 The left unit of the advanced guard charged; the Ottawa evaded. Bill noted how isolated the charging troops became. I noted that the 6 lb. artillery section was now unsupported. The guns hit the militia and got Captain Beaujeu. Had we been using the risk to leader rule as written, Beaujeu would have been dead. He was slain early in the fight in the actual battle. But our house rules determined that someone next to him was killed and Beaujeu took the rest of the turn to wipe the gore off. 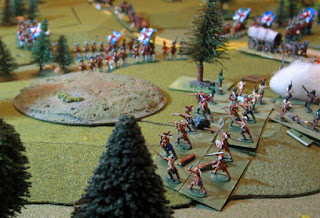 The Canadian militia charged the guns and defeated the crew in a melee that lasted two turns. We decided the crew abandoned the guns. The militia halted in place, looting the dead. The Chippewa and the Troops de la Marine shot down Grenadiers, who flinched. 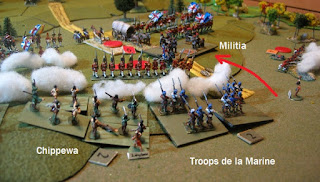 The Troops de la Marine charged with bayonets and tomahawks. The Grenadiers took to their heels, spreading disorder into the 48th behind them. The beaten gunners fled the field. The French pursued into the lead supply wagons. 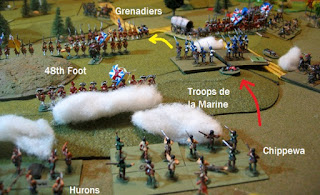 Part of the 44th charged and the French evaded before they could loot the wagons. 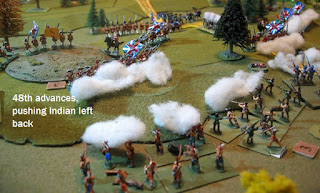 The “grenadiers” retreated under fire and also spread disorder in the ranks behind them. 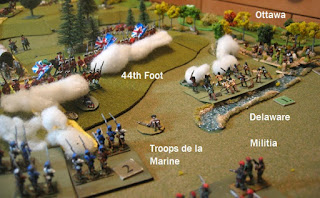 The gun crew had routed and 5 British units were weakened; British morale was shaky. 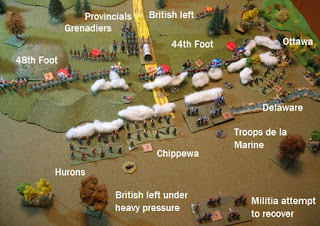 The 48th came forward, pushing the Indian left before them. 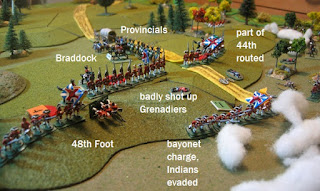 Elements of the 44th routed. Another part of the 44th retreated under fire. Two routed and 5 weakened units (counting as half a unit each) and one retreating (half unit) totaled 5 units for the British breakpoint; the British army collapsed. 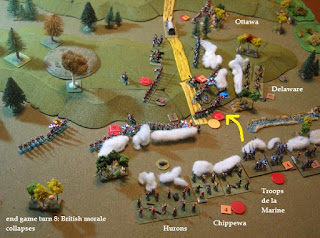 The French/Indian force had two weakened units; 1 towards their breakpoint of 3. It was closer than it looks. Several French/Indian units had 3 hits, very close to being weakened. On a late turn in the game Bill rolled 24 dice needing sixes for hits. He got none. He figured his morale would have broken anyway but he’d have weakened more of our units if his luck hadn’t gone south.

We played 8 turns in 2 hours and 12 minutes, about 16.5 minutes per turn, counting photo time. Not bad for our second game and changing theaters of operation. We had some errors, of course. Not until late in the game did we check morale for the hit that made units weakened. We did check for hits taken after being already weakened. I don’t think it made a huge difference. I do wonder about a fairly fresh unit being assured of closing frontally against unsupported artillery. Perhaps if the guns get two hits the attacker should check morale. It also occurs to me that Indians should check morale when hit by artillery.

The French/Indians took 16 hits. The British took 39 hits, though I think 6 of those were disorder hits from units retreating through friends. I’m quite pleased that the game worked as well as it did. There will be some more French and Indian battles in our future.
Posted by vtsaogames at 11:29 AM No comments: