Medals Lost & Found, and a book review of A Hill Called White Horse

This is the fourth of my Father-in-law’s reminiscences of his duty in the Korean War. My notes are in italics. The text below is his.

In May, 1953, I had earned the 36 points needed for rotation from Korea, and my reserve commitment of two years active duty was nearly over. I had spent time at Fort Benning, and Dix, and as most other new second lieutenants had, been flown over to FECOM; NY to the West Coast (Lawton). Then the 4,900-mile flight via chartered DC6 flight to Alaska, down the Aleutians to Tokyo (Drake), then by train and boat to Korea and on the 2nd Division, 23rd Inf Reg. as a replacement platoon leader. I expected to be returned to the States in the same expeditious manner.

When the time to go home finally came, I found out that the Army was using WWII troop ships to transport those headed east of the Mississippi River and home, a trip taking 42 days from Inchon to NYC.

Officers were assigned deck cabins, 9 to each, while the enlisted men were put in the hot hold of the ship. We made calls at Honolulu, Balboa (Panama Canal), San Juan and then to the Brooklyn Navy Yard.

Officers were allowed off ship at ports, but the enlisted men were not. On June 10, 1953 I was far out at sea on the good ship General Sturgis, a 522 ft troop transport which had been stamped out by Kaiser in 1944. It could only do 17 knots. I went to Camp Kilmer in NJ where I was discharged from active duty. A week or two later I received one of those big brown envelopes that orders came in. To my complete surprise, it contained a General Order (many copies as usual) and a certificate awarding me the Bronze Star Medal, but no medal was enclosed. It was soon forgotten in the quest for earning a living.

In the 1980’s there was a return to patriotism under the Ronald Reagan administration. I joined the local VFW where veterans wore medals when they marched in the Memorial Day parades. Reagan had made it possible for those who had been awarded medals but never received them to get them.

So, I made application. It was turned down because the GO had not been received in time to appear on my discharge from DD214, and I couldn’t find the brown envelope with a copy of the GO as proof. The matter was again forgotten.

In 1991 the envelope turned up at my parents’ house, so I had my DD214 amended, and finally did receive the medal in the mail.

In 1992 my son had it formally presented to me by his M.P. reserve company from New Haven, Connecticut which had just returned from active duty in the Gulf War, nearly 40 years after the award was made, June 23rd, 1953.

That’s my father-in-law’s story about his Bronze Star. Perhaps someday he’ll tell the tale of how it was earned on that hilltop in Korea. I’ve been interested since I met him in 1999. He recently sent me a book about the Battle of White Horse. He described his part in that battle in the second installment of his Korean War stories here. My review follows, dispensing with italics.

My father-in-law sent me a copy of this book, by Anthony Sobieski. The author’s father was an artilleryman in the Korean War. The book is based on interviews with US artillerymen who served with the ROK 9th Division during the battle of White Horse. Anyone considering rules for artillery and forward observers for their games would do well to read this one.

The battle gets very little coverage in English, since the 3-division Chinese attack fell mainly on the ROK troops and partly on the French battalion attached to the US 2nd Division. It was a hard fought 10 days. This book covers the first two days. It is written in current tense, with dialog and inner thoughts. I was uncertain about that but once the offensive started was swept up in the action. Most of it takes place in forward observers’ bunkers, with dirt shaking down from the roof when incoming artillery lands nearby.

HE (high explosive) and VT (variable time) rounds are called by the observers onto attacking Chinese formations, while the ROK troops bear up under Chinese attacks and barrages. Some of the forward observers have to fight with rifles and grenades. The cover of the book has a photo of an observer’s helmet that has entry and exit holes, taken after the fight.

I do have a beef with the book. Like many books these days, there was no proofreader. Spell check on word processing programs isn’t good enough. Words that sound alike but have different meanings appear, like you’re and your, quite and quiet, etc. I’m kind of fussy about that and find it irritating. Your mileage may vary. If you’re interested in the Korean War and/or US artillery operations, give this book a look. Now I’m trying to resist getting “Ten Days at White Horse”. My book shelves groan as it is.

EDIT: Haven't found a copy, so temptation won't be that strong.

A minor note: a fellow on a game forum said that the Chinese did not use any tanks in the Korean War, instead using SU-76 self-propelled artillery. If this is the case, I’m sure people in action against fully-tracked, armored fighting vehicles might be forgiven for thinking that enemy vehicles that looked, sounded and fired like tanks might be tanks. The North Koreans certainly started the war with a brigade of Soviet T-34/85 tanks.

Darkest Star Games adds this: Saw your note at the end on Chinese tanks. Hads a look at this not that long ago and research shows that most of the 400 or so NK T34s were knocked out by early 1951. After that the tank burden fell on the Chinese T34-85s and Type 85s (same tank, later manufactured in China). Yes they were often used as mobile artillery, but they also clashed with Shermans and Pershings on mobile offensives, knocking out 30 some-odd UN tanks for a loss of 120ish. Difficult subject to research, let me tell ya... 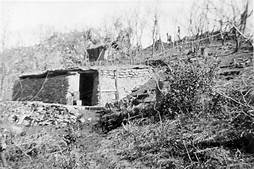 A bunker in Korea
Posted by vtsaogames at 11:49 AM 1 comment: