We played the training scenario from the Shadow of the Eagles rule book again. Jay decided to play the French, leaving me the Prussians. Carl was due later and would get his pick of commands on arrival. Jay last played a work-in-progress version of SotE in February 2020, just before things hit the fan. The game has changed a bit since then. It was good then but is distinctly better now. It was Jay’s first in-person game since before Covid. We are all vaccinated, knock on wood.

Last time all units were rated regular to keep it simple since Carl was new to the period. His previous gaming experience was DBA, javelins, arrows and all that. Jay returned a couple years back to gaming from a hiatus of several decades but he knows voltigeurs from grenadiers, canister from round shot, so I put 1813 ratings on both sides. It turns out I penalized the French more than the Prussians.

The French light infantry brigade had two regular battalions, 1 provisional battalion and a regular foot artillery battery. Provisional units have regular training but poor morale. The line infantry brigade had 1 provisional battalion and 2 poor ones, recent poorly trained recruits. The light cavalry brigade had a regular hussar regiment, a poor chasseur regiment and an elite battery of horse artillery. We also rolled up an inspirational general for the cavalry brigade. His units can sometimes move twice in a turn. In the heat of battle this was promptly forgotten. I think we need to have inspirational brigadiers accompanied by a staff figure as a reminder, and a wounded foot figure for any inept brigadiers. Next time… The French rolled one inept brigadier but their +1 on initiative allowed a reroll. Turns out the inept chap was on sick leave, replaced by his capable second in command.

The Prussian line infantry brigade had 1 regular battalion, 1 poor landwehr battalion and a regular foot artillery battery. The Prussian heavy cavalry brigade had 2 regular dragoon regiments. The light cavalry brigade had a regiment of regular hussars, a poor regiment of landwehr and an elite horse artillery battery. The independent Light Infantry battalion was regular fusiliers. All my brigadiers were capable, though some die rolls had come perilously close to inept. Guess they laid off the schnapps today.

So the Prussians had only 2 poor units of 9, while the French had 3 poor and 2 provisional of 10, half their units sub-standard.

Enough of this, on to the combat. French breakpoint 5, Prussian breakpoint 4.5. The deployment follows. 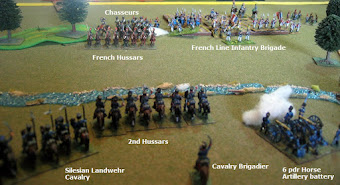 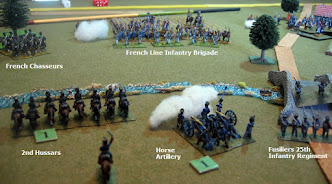 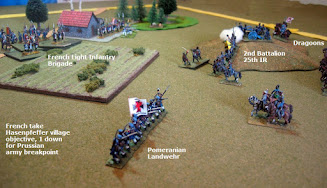 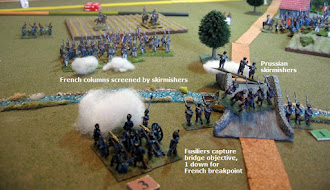 It became clear that the French line brigade was headed for the bridge. The CO shepherded the Landwehr battalion in that direction to back up the Fusiliers while the 2/25th moved right to support the battery on the hill. The Dragoon brigade moved from supporting the guns to plug the hole opening in my right center. 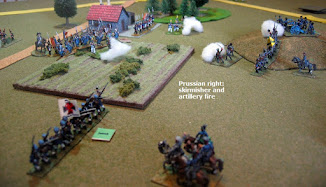 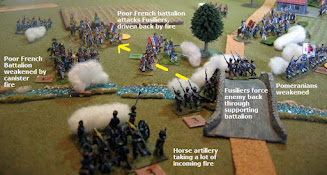 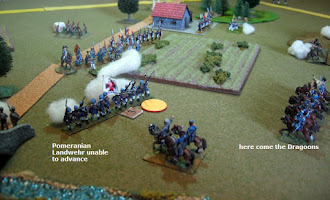 Carl arrived. Jay had and he had not seen each other since before the pandemic. We broke for dinner, which was leisurely and accompanied by Carl’s wine and Jay’s beer. Furthermore, the weather was quite nice, not so hot and muggy and much of the smoke from the west coast fires had been cleared by the previous day’s rain. After dinner Carl turned down an offer to take over the Prussians. Given the pick of brigades, he was down to either the French light cavalry brigade or the Prussian heavy cavalry brigade. A die roll put him on my side, fortunately for me, as it turned out. About this time Jay’s dice went cold and he scored precious few hits for the next two turns. 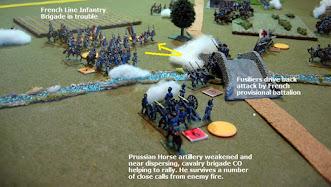 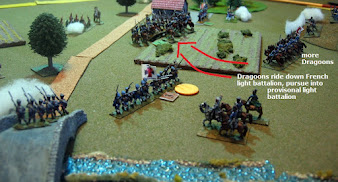 The light infantry battalion had 3 hits. It only got 1 hit on the charging dragoons, not enough to stop them. They failed to get any in the close combat. The dragoons needed 4+ on their 4 die rolls to get hits, modified by +1 for charging, +1 for general attached, meaning they got hits on 2+. They rolled 3 hits, winning the fight. Units losing fights take another hit, so the battalion had 7 hits and routed, putting a hit on their neighboring provisional light battalion. A die roll said the dragoons had the option to pursue and they did, into the provisional unit. That fight would be resolved next turn. 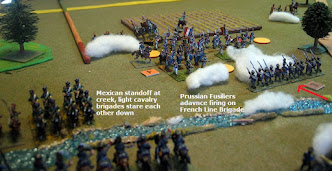 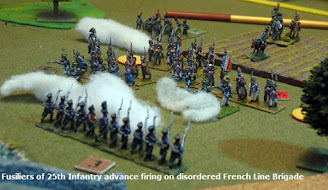 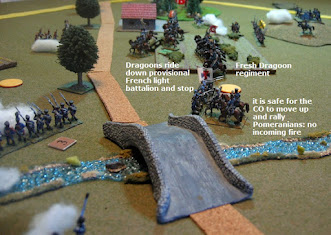 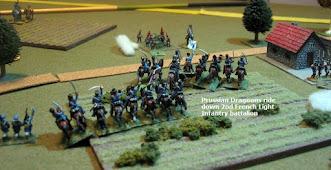 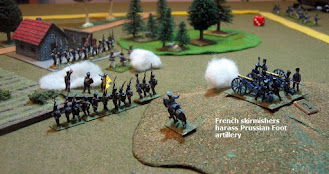 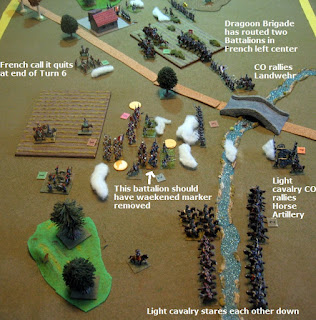 With his center ripped open, no reserve and two Dragoon regiments in good shape able to exploit, Jay threw in the towel. He had lost two units and the bridge objective for 3, plus two weakened units for another 1, for a total of 4 towards his breakpoint of 5. There was an unsupported artillery battery in easy reach of a fairly fresh enemy Dragoon regiment. Even if he managed to pivot, face them and get 2 hits, the cavalry would still ride them down. The Prussians so far had lost the town objective for 1. On the rally phase of the last turn both the horse artillery and the landwehr had rallied back from weakened status so we were 1 towards our breakpoint of 4.5.

After the guys left it struck me that Jay’s regular light infantry battalion could have tried to form square on a 4+ die roll, a 50/50 chance. The dragoons would have been highly unlikely to break it. If the attempt to form square failed, well, the infantry would have gone down the tubes (as they did anyway), since units that fail to form square don’t get to fire or fight in the ensuing close combat. I emailed this news to the guys. Jay responded,

” Much like life itself. It was a terrifically fun game, nonetheless.”

We all enjoyed the game.

We played 6 turns in a little under 150 minutes, about 25 minutes a turn. I presume we can improve that with practice. It was agreed that we should move on from the training scenario. Perhaps we’ll get the next one in a couple weeks, depending on the vagaries of life.

A minor point: typos in the photo text are most evident after the photos are saved.

The Combat of Hasenpfeffer, 1813 (Shadow of the Eagles)

Last night Carl came over to try his hand at Napoleonic combat with the new Shadow of the Eagles rules. I have been involved with some game testing of these rules although my last game was in February 2020, just before the plague hit. The rules have evolved since then. Carl hasn’t played the rules before or the period, having mostly played DBA back in 2019, to the best of my recollection. As a result we played very slowly. The dinner conversation was lively and prolonged as we and my wife swapped quarantine tales. We haven’t seen him in person for quite some time. While I do like a good game, good conversation with friends is even better.

The objectives in the scenario don’t have names. I dubbed the town Hasenpfeffer and Carl named the bridge Fahrshnügen. I put down some fields and assorted terrain pieces just to dress up the table, more since the first picture was taken. Since this was Carl’s maiden voyage with the Napoleonic period and the rules, I gave him the French (+1 for initiative) and one of his 3 brigadiers could be inspirational (1/3 chance of making double moves in a turn). To keep this first game simple all troops were rated regular, no superior or inferior types present. All commanders save the one inspirational Frenchman were capable. 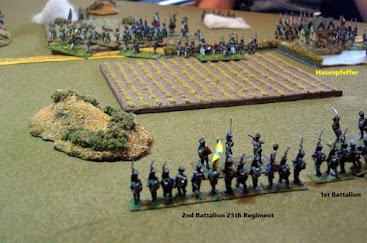 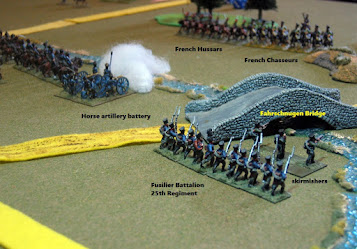 French Chasseurs a Cheval charged the Prussian Fusiliers but were stopped in their tracks by a hail of musket and canister balls. I advanced with my 1st and 2nd battalions of the 25th Regiment to test the water. 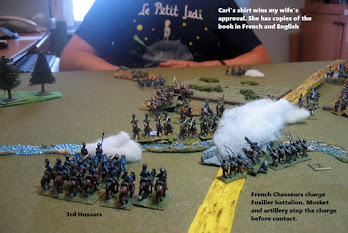 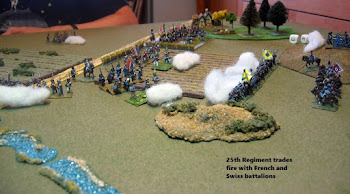 They did well at first but Carl got another one of his battalions into the firefight and his dice improved. The short advance made for enough confusion that the weakened French Chasseurs didn’t fall back. They were routed on the next turn by a blast of fire.
Edit: this was a rules error on my part. When the Chasseurs' charge was stopped by fire, they should have fallen back immediately a distance determined by dice rolls. They would have been badly shot up and incapable of offensive action any time soon but would not have been routed. 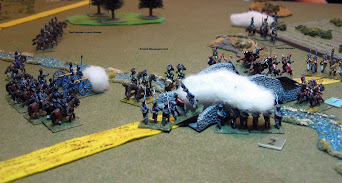 An unheralded storm broke. Our windows were whited out by rain, the first time I’ve seen that in over 20 years. The worst soon passed and we sat down to dinner. This morning the widely heralded tropical storm Elsa visited and was not nearly as impressive.  The unnamed “minor” storm last night flooded roads and subway stations in uptown Manhattan.

We returned to the table for a last turn. My 2nd Hussars charged the French horse artillery battery, taking a hit on the way in. The gunners fled to the nearby French Hussars while the Prussian cavalry pursued on towards the unsupported French foot artillery battery. On my right, the Dragoons fell back from their short charge and the 25th Regiment decided to drop back out of range. Their brigadier came forward and rallied one hit off the most banged up battalion, barely removing the weakened marker. I avoided trying to recapture the bridge with the Fusiliers, preferring to wait until the chance of keeping it was better. 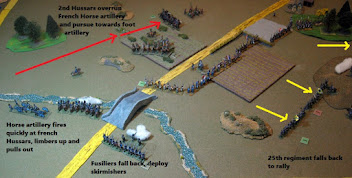 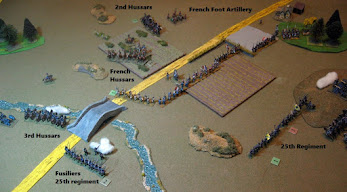 We called it a day since it was getting late. The named storm was approaching. I did suggest we roll for initiative for the next turn that we wouldn’t play. I won it again. That meant in the next turn my 3rd Hussars could charge the French Hussars and keep them from interfering against my 2nd Hussars deep in the French rear. I figured the 2nd could go on to ride down the unsupported foot battery. Later I noticed the 2nd was out of command control, as was the foot battery. The 2nd could indeed ride down the guns if they passed an ability test, 50% for regulars. If they failed, then the artillery had a 50% chance of pivoting to gun down the cavalry with canister while they milled around, possibly over some looted goodies the horse artillerymen dropped while running away. That would not be a pretty picture.

Carl’s combat dice started out lukewarm and improved to decent. Mine were about the odds most of the time. But my initiative dice were hot. Even though the French had a +1, I got the initiative 3 of 4 times. That’s a big advantage.

We played 4 turns in just under 3 hours. but the first turn was very long. It required a lot of explaining, not just of the rules but of stuff grognards take for granted, like limbers, canister, column, line, square, skirmishers, etc. I’m sure we’ll get the playing time down a lot more next time.

All in all, it was an entertaining evening. Carl liked the rules and so did I. Not bad, keeping the attention of a relative newbie and a grizzled grognard. I’ll see if I can get another game of this together in a couple weeks.