After a long vacation I picked Muskets and Tomahawks because it doesn’t require a lot of advance preparation. The report is going to be brief since I have been riveted to the TV watching World Cup games. Expect some semblance of normalcy here after the final match.

We last played a M&T game that produced a British force out for Indian blood. I only had one longhouse and had to make do with settler buildings and colonist figures. Afterwards I acquired some Blue Moon Indian villagers and Indian and Militia casualties. Proper painted figures seemed to demand a repeat of the scenario.

The first game saw Rick take the threatened Micmac village while Bill led the vengeful British forces. I umpired. Having not played the game in a while, I made mistakes.

The scenario required the defenders to leave 3 units off the table in reserve. Rick chose 3 bands of warriors. Bill came on and ground up the defenders with superior numbers in firefights. 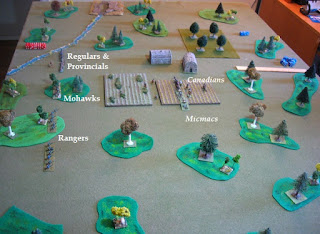 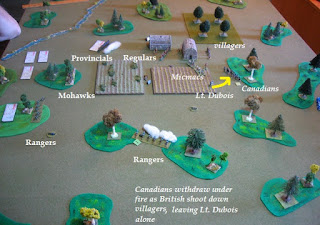 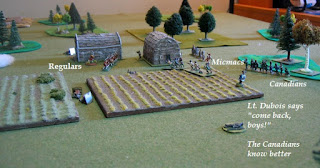 Then the Regulars charged with bayonets. I forgot to have the Indians check reaction before receiving the charge. The regulars’ dice went cold and the Indians got the better of them in the first round. More carnage saw the warriors finally run, leaving the Regulars much reduced in numbers. 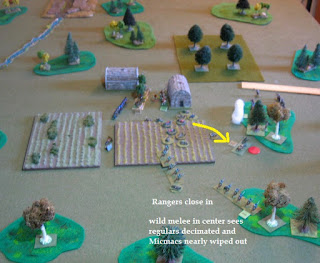 The French and Indians had trouble getting the reserves onto the table. All arrived by turn 4, when dice determined the game was over. As the photo below shows, the game was a tie. Andrew arrived and observed the last turn of the game. 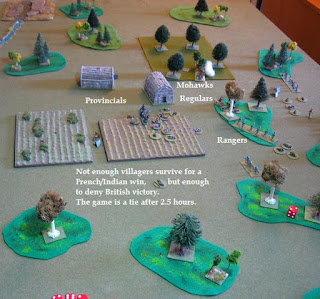 Edit: Bill informs me that on the last turn the British gunned down the last villagers and so won the game. I blame the beer that accompanied dinner, and my preoccupation with World Cup matches for the reporting error.

We broke for dinner and the potent brew that Andrew had brought. That seemed to slow the photography down.

Andrew and I commanded the vengeful British while Bill and Rick led the defenders. My plan was for Andrew to flank to our left and cut off the escape of the Villagers while I pressed frontally with the regulars and Provincials. On the first turn the Canadians made mincemeat of the Regulars. One part of the plan was out the window. The reserves arrived slightly more promptly than in the first game and savaged Andrew’s flanking drive. The entire plan was now up in smoke. 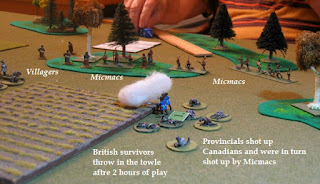 Our surviving troops were outnumbered more than 4-1 by warriors and Canadians, so we threw in the towel.

Muskets & Tomahawks is an entertaining system. I didn’t pay enough attention to the reaction test modifiers. A number of units would have bolted had this been done correctly. Perhaps next time… …which will be in a few weeks, as we are off again. The next game will be after the July 4th holiday.

Posted by vtsaogames at 3:15 PM No comments: