We played the first test game of my scenario back in late August. While it was fun, it called for some tweaks. We finally got around to testing the changed version yesterday. Bill played Bragg and I Rosecrans. Jay played Breckinridge when he arrived. Andrew would take the role of Crittenden when he showed. We got off to a late start, thanks to traffic delaying Bill. The first photo shows the deployment for the first test. It was pretty much the same for the second test, with minor changes. The rules are Bloody Big Battles, as usual, with my 15mm Yankees vs. Bill’s 15mm Rebels. From here on and in the photos, all Confederate units will be in italics. 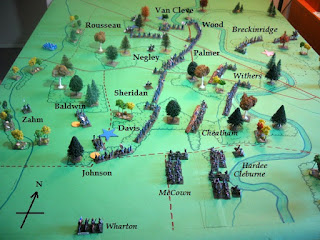 Bill couldn’t land a bayonet charge on the first turn. His rifle fire did knock off a base. Johnson’s  disrupted troops didn’t rally on my half of the turn, thinking it unsporting to do so. 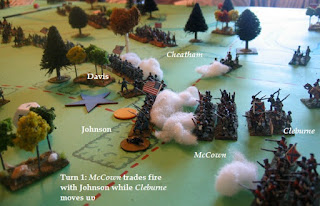 The 2nd turn saw a dramatic change. McCown and half of ’s infantry attacked Johnson’s front line. This negated the Union zone of control and Wharton’s cavalry rode across their rear, falling on Johnson’s artillery from behind. The gunners put a hit on McCown’s artillery. Wharton rode down the gunners and charged on into ’ flank. dropped a lot of troopers and the rest scattered to the winds. The infantry assault wiped out Johnson. McCown exploited into ’ flank and was repulsed. had held off two attacks in the same assault phase. That loud sound I heard was my right flank being torn to shreds. 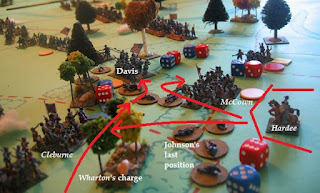 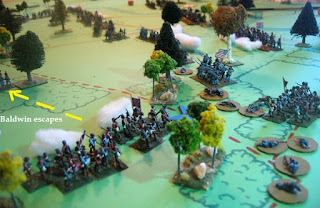 rallied in place and was assaulted in flank by McCown on turn 3. Two bloody ties saw both divisions spent before was finally defeated and sent packing to the north. McCown would spend most of the rest of the game licking his wounds on the bloody patch of land he’d just won. 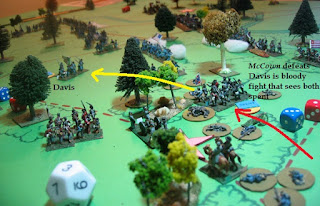 got the full move he needed to fall back. Had he failed, the division would have been enveloped; put between a rock and a hard place. I think this was the most critical die roll of the game. It didn’t hurt that Baldwin (Johnson’s reserve brigade) also escaped. About this time I slipped Zahm’s tiny cavalry brigade around the enemy left and lurked in the enemy rear, making artillery movement hazardous. Hardee was sent off to Breckinridge since ’s division is always in command in this scenario. 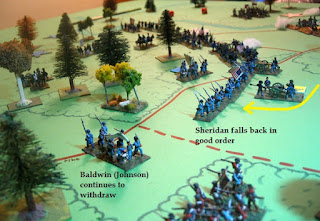 Hard fighting ensued. Bill’s assault dice went cold, with me usually beating him by two, nullifying the advantage he should have had from most of my troops being fragile. 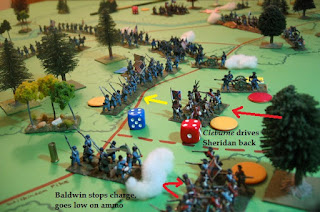 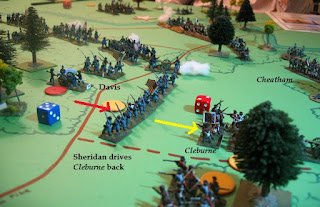 We broke for dinner. A quick check showed the had lost twice as many troops as the Confederates, giving them a victory if the game stopped then. We had 4 more turns after dinner, which was Bill's excellent smoked fish, bagels and bialys, along with fine wine and beer from Jay and Andrew. After a lengthy meal we returned to the fray. It occurred to me later that the Confederates could have reverted to a strict defense and made us come to them to even up the score, but they went for the kill, trying to break our right flank. 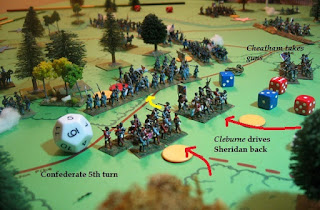 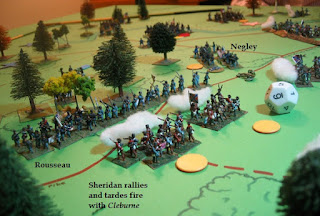 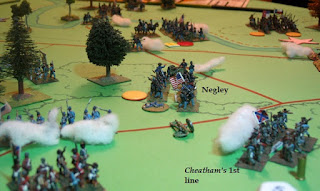 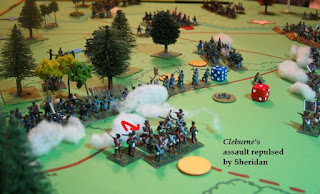 I sent green troops to attack and was lucky to escape with a mere repulse. 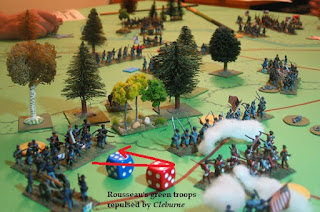 The action heated up on the left as Andrew started fording the river, intent on mayhem. 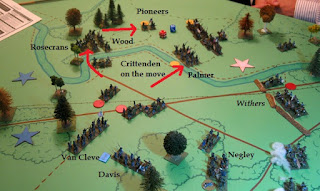 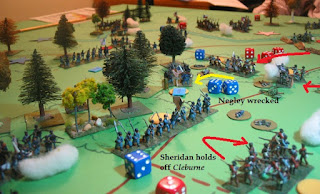 I should have waited a turn but thought perhaps the guys were ready to end the game. 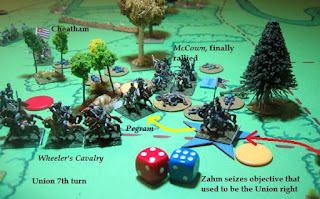 , hurt by heavy rifle fire, now faced Sheridan in front, Baldwin on the left flank, and artillery unlimbered within easy canister range. The fire factors would total just over 12, putting it in the 16 column and flank fire moved it into the 20 column. Hard to miss. 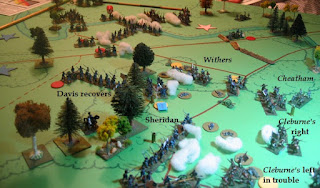 They tried to escape but were halted by fire and shot down in two fire phases. 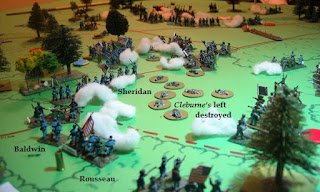 Adding insult to injury, ’ division recovered enough to no longer be spent and relieved Negley’s badly shot up division. 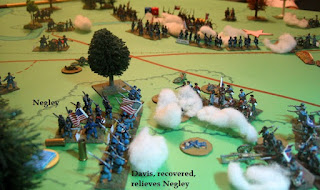 During this Crittenden ( left) and Breckinridge fought to a draw. The tiny Pioneer Brigade led the attack and was wiped out for their troubles. Wheeler’s cavalry got a full move. They turned around, deployed and terminated Zahm’s cavalry brigade. 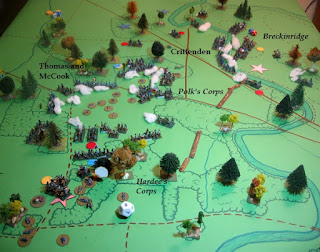 It took us a little over 4 hours to play 8 turns. The game moved noticeably faster when we had 2 players per side. One of these days we’ll manage that from the start, but life keeps interfering with our schedules. The game was a sanguinary tie, since each side had two terrain objectives and the 2-1 loss ratio was gone with the wind. Union losses were 10 infantry bases eliminated, 2 run off, 4 artillery (half of them!) gone and 1 cavalry for a total of 17 bases. Confederate losses were 12 infantry gone, 1 cavalry and 1 run off for a total of 14. This equates to just under 10,000 casualties per side, not unlike the actual toll on the first day. We made a few errors. We forgot to bring on our reinforcements, although unless the fighting is close to the Nashville Turnpike they won’t make much difference beyond raising the spirits of Union players. We also forgot that the last turn was twilight and were firing artillery at full ranges. Bill needs to sacrifice a small animal to the dice gods next time. There was talk about checking my dice, though Andrew used some of mine and I didn't notice him wiping the floor with Jay.

The Fencibles like the scenario. After I clean up the small map this scenario will be submitted to Chris for the full BBB treatment. We will be playing simpler stuff for the next couple months until the renovation of the game room is complete. Then we can resume gaming in sybaritic splendor, providing I can recall where stuff is stored under the new system.
Posted by vtsaogames at 11:40 AM 1 comment:

Why the Battle of New Orleans mattered

From time to time I have run across posts on internet military history sites that state the Battle for New Orleans was all for naught, since the peace treaty had already been signed. I can’t resist the urge to refute this claim. Rather than restate it from time to time, I thought I’d just write it down here and then link to this post when needed.

But first, a print of the battle by the noted military artist Don Troiani, known for his diligent research: 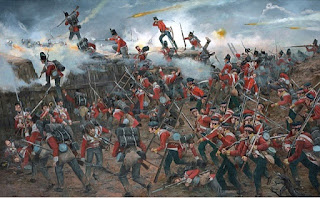 This is Lt. Col. Rennie's British attack that briefly penetrated ’s line. The Highlanders (in red and white checked hatbands) are wearing trews (trousers) instead of the kilts they are usually (and inaccurately, for this battle) portrayed in. Rennie was killed.

Why did it make a difference, since the Treaty of Ghent (ending the War of 1812) had been signed on 14 and the battle was fought on 15? The diplomats who negotiated the treaty knew that word traveled slowly, only as fast as sailing ships or horseback couriers. They also knew that a major British expedition had been sent against American positions in the . That’s why the treaty specified that troops would halt in the locations they were in when news reached them.

This means that if the British Army had taken before the news reached them, there they would stay for the foreseeable future.

The treaty also specified that troops of each side would leave the territory belonging to the other side. You’d think that means the British would then evacuate once news reached them. But was part of the enormous , a rather shady deal made by the now-deposed Napoleon Bonaparte. did not recognize the legality of the Purchase. In the event of a successful capture of , most likely after a victory over the defending American army, they could be relied upon to insist that they were not on territory. As is often said, possession is nine tenths of the law.

That would leave the with the unenviable choice of starting the war anew to recapture . This would be after a notably mixed record in the war, including a number of humiliating defeats suffered by the US Army. The economy was in tatters due to the British naval blockade. Or they could enter the post-war negotiations (the Treaty left many issues unresolved) with a severe handicap. The White House and other government buildings had been burnt by the British the previous August and repairs were proceeding slowly.

’s crushing victory made the British stance on the legality of the a minor historical footnote. Who cares? More to the point, who remembers? And again, possession is nine tenths of the law.

It also was of importance to domestic American politics. First, ending the dubious war on a high note allowed Americans to feel they had won the war, even if the original issues that caused the war had not been addressed. The triumph put the final nails in the coffin of the based Federalist Party, who had been opposed to the war in the first place. And it made Andrew Jackson a popular hero, leading eventually to his ascent to the presidency in 1829.

Irv H. wrote an answer in another online forum that pointed out the strategic importance of New Orleans. It was the port that controlled the mouth of the Mississippi River, not only of critical military value, but the trade of the enormous area drained by the Mississippi and Missouri could only reach distant markets by passing through New Orleans by boat. After railroads made other trade routes feasible, the river still provided the cheapest way to send agricultural and manufactured products to market. Grant's drive to open the Mississippi during the Civil War not only hurt the Confederacy deeply, it opened up trade for the restive Northwest and helped dampen the pro-Confederate Copperheads of that region. Had New Orleans been in the hands of a hostile power during the early 19th century, there is no telling how this would have stunted the growth of the new republic.

Footnote: other myths about the battle

US Soldiers fought behind cotton bales. No, they fought behind a mud wall earthwork reinforced with wood, using the as a moat of sorts. Cotton bales were sunk into the mud behind the wall to provide stable platforms for the artillery.

The British ran to the Gulf Mexico. No, though the popular song says so. The British fell back out of artillery range after their assault failed with heavy losses. kept his army behind the wall, only sending skirmishers out to maintain contact. He knew the British veterans, though mauled, were still dangerous. The song also mentions Colonel Jackson. You may rest assured that he required people to address him as Major-General.

The battle was won by the marksmanship of American squirrel hunters. While there were some of those, the bulk of British losses were likely caused by the substantial number of artillery pieces in ’s line. 14 guns, the majority of them heavy, sprayed canister and grapeshot into the advancing British. The British commander Pakenham was hit four times, once by a bullet and the rest by artillery projectiles. For ordnance purists, yes, some of the guns were heavy naval guns and were firing grapeshot.

American losses were 7 killed, 6 wounded. These are only the losses against the main attack, ignoring the defeat on the south bank of the (nullified by the main British defeat) and the losses taken by skirmishers after the assault. Total losses were closer to 100, though this is dwarfed by the 2,000+ British casualties, including the British commander and his second in command killed, and every British brigade commander in the attack killed or wounded, all in some 30 minutes. Over 400 of the British losses were soldiers who surrendered rather than risk that hail of fire again.

The attacking army was British-Canadian. While there may have been a few individual Canadians in Pakenham’s army, the vast majority were British. There was not a single Canadian unit in his force. There were two West Indian regiments (suffering badly from the winter weather) in his force which rather makes calling the force British-Caribbean more likely. But I digress.

Posted by vtsaogames at 11:36 AM No comments: