Last Thursday we played a game of Rebels & Patriots set in the Seven Years War. Instead of 12 figure infantry units, we used 16 bases with 48 figures per battalion, using 4 of our usual battalions grouped together. That’s why they have so many flags. Small units (cavalry squadrons and skirmishers) have 8 bases with 16 or 24 figures respectively. I figured we could have lots of figures on the new teddy bear fur game mat (from Killing Fields) and yet have a small number of units on each side.

The Prussian general Zeitgeist rolled up wheezy as a character trait. It prevented him from entering woods, no big problem since the Prussians have no light troops in this scenario. Austrian general Esterhazy got ballroom darling, which allows him to get give a unit a 3” bonus move once per game. Rick correctly predicted it would be forgotten in the heat of battle.

The scenario is based on the Lament Ridge scenario, with the ridge replaced by the crossroads.

Both sides deployed as below. Moltke said “errors in deployment cannot be rectified”. 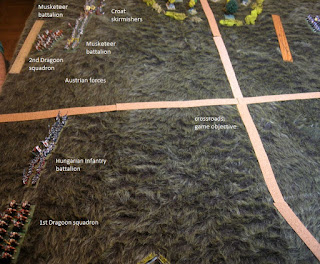 Cavalry on both sides could not wait to get into musket and artillery range of the enemy. 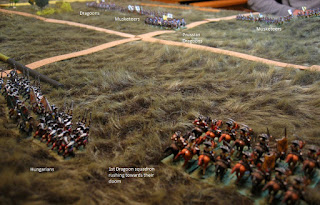 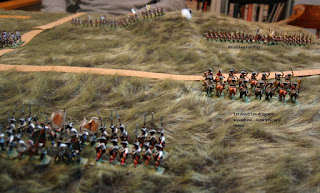 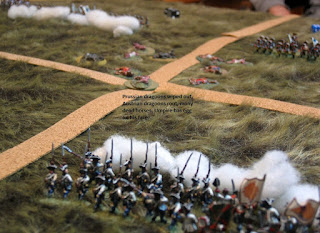 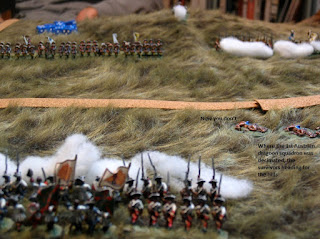 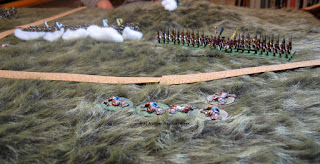 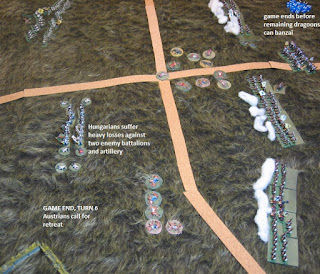 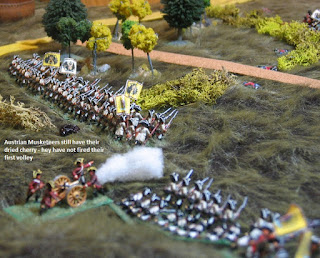 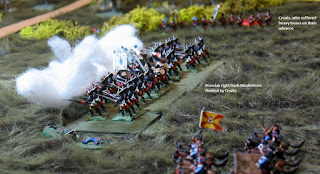 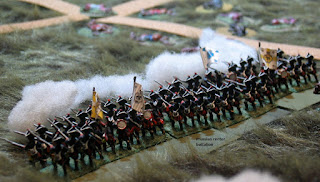 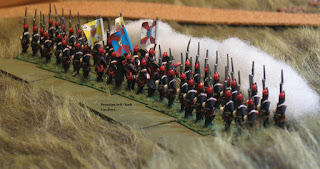 General Zeitgeist AKA Bahama (don’t ask) gained 6 honour points. General Esterhazy got none but avoided getting hit by enemy fire.

I think this worked well and looked pretty good. We used magnetic sabot bases to show that units were in close order. I think in the future we’ll put all save skirmishers on these bases (4 small bases fit on each) and indicate close order by putting them together neatly, and otherwise by staggering the bases. Our next game of some sort will be after my trip to Maine.

Most of the Fencibles were unable to attend last Thursday’s game session due to the various demands of Real Life, leaving just Rick and I. We decided to play the new board game by Mark Herman. A very short review of the game can be found here
A more extensive review with some details of a game played is  here

The game has just a few counters, a small map and rules that are simple but not simplistic. The game is billed at requiring 60 – 90 minutes per game. We set out for our first game with Rick as the Union Meade and me as the secessionist Lee. The game is simple but radically different from other board games we have played. Each day has two turns, morning and afternoon, six turns for the whole battle. Players take turns moving units (CSA has 9 infantry division counters, has 7 infantry corps counters). Units can be moved multiple times in a turn. Once one player (typically the Union player) passes, the other rolls a die and adds the number of unengaged units on the map to find how many turns are left. Units have a marching side (4 movement allowance for infantry, 6 for cavalry) and a battle formation side with 1 hex movement for all. Marching units that spend their entire move on roads move at double speed. Once within 2 hexes of an enemy combat unit, the moving unit must flip to the battle formation side. Getting a coordinated attack together once the other side has passed can be a real chore. The combat phase is similar, each player attacking in turn until one passes, leaving the other to roll a die to determine how many more attacks are available this turn. Victory is based on losses. Since the wins ties, the onus of attack is on the Confederates. Each side has a number of artillery support points (CSA 11, USA14) that can be expended in any given combat. When both sides call for artillery, a dice-off artillery duel decides which one influences the fight.

We played the first three turns of the game. A combination of hot dice and Rick having trouble reading the map and counters resulted in 3 Union corps sleeping with the fishes. Rick threw in the towel and I agreed it was hopeless at that point. We had played 3 turns in about an hour, but then it was our first game and we consulted the rules regularly. As noted above, there are some very different concepts in this game. We broke for dinner.

Afterwards we played a second game, switching sides. I rapidly developed a method of falling back into defensive terrain (ridges and hills) and then passing, making it hard for Rick to launch coordinated attacks. Still, he was pushing me back steadily for the first two days, with each side losing a single unit to the dead pile. The elite Union I Corps was knocked out for two turns but returned to the fray late on the second day. (Units can be knocked out for two turns or forever) The third day saw me farther back than the actually retreated, but with a tie looming Rick had to make a number of hasty assaults. The dice gods forsook him and he lost two more units without taking any Yankees with him. We decided to end the game. We had played 5 turns in 90 minutes. Again, Rick had trouble reading the map and the unit counters.

We were both intrigued by the movement system. I can see this being used for an operational game, like vs. Joe Johnston in north in 1864, with perhaps each day being a turn.

Minor beefs: the map is pretty but the hex lines are faint. A less pretty map with clearer hex lines and defensive terrain would help our aging eyes. The CSA units are listed in the order they appear, very helpful. But the units are listed in order by corps number, which is not the order they appear. I will have to make a list. Also, the turn units appear are listed, for example, 7 . This happens to be turn 2. If the list just said turn 2 it would be easier.

Minor beefs aside, this is an interesting game system and gives a decent rendition of the actual battle. The first two days are hard for the but if the Rebs haven’t hurt them hard by the third day, they are going to have to try to take the Yankees out then and there, perhaps with something risky, like Pickett’s charge.

In two weeks we will play a Seven Years War game with a small number of units, each with lots of figures. It should look quite nice but still give a quick game.