Twilight of the Sun-King, Balagan version 2

I set up a small test of the new version of these rules that Steven Thomas is working on. This is a work in progress and not to be confused with the published set by Nick Dorrell. They are similar, being based on the first set that Steven posted years ago. I seem to recall that each unit is a foot or horse brigade or a battalion of artillery.

The rules are for the War of the Spanish Succession. I played using Seven years War figures and make no excuses. The Austrians were defending an earthwork with 4 foot brigades (1 of grenadiers, 2 of line and 1 of inferior troops), 2 horse and a battalion of guns. The attacking French had 5 foot brigades (1 of grenadiers, 3 line and 1 inferior), 2 horse and an artillery battalion. About 10,000 vs. 12,000.

The rules have only two types of tests. Units in combat take morale tests to see how they respond. If they fail a test, they take a hit. 4 hits removes foot units, 3 removes horse and 2 removes artillery. The test is with 2D6 and is modified by how threatened the unit is, etc. Players do not roll to hit enemy. They just amass as many threats as they can to make it harder for the foe to pass morale tests. An unmodified score of 4 or less (1-6 odds) turns any attached general into a casualty, who is immediately replaced by an inferior (1-3) or ordinary (4-6) general. This test saw a rather high rate of general officers hors de combat. There is a negative modifier for not having another unit in rear support close by. An ordinary unit has 21 chances of 36 to pass a morale test, barring any modifiers other than troop quality. Take away support and the chances of passing are 15 of 36. This explains the double lines in the photos.

Any movement other than straight forward involves an action test, also 2D6. Do not try to do complicated stuff in front of the enemy. Odds are that you will fail and be hung out to dry. Trust me. Do the fancy footwork far away from the enemy.

Most of the action can be seen on the following photos. Units start deployed on a roll of 4-6, or in march columns and limbered on 1-3. The Austrian die roll noted they were aware of the advancing enemy. 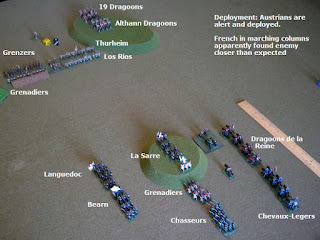 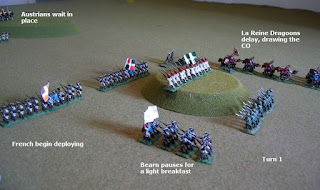 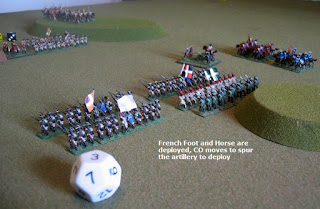 Turn 4 the French artillery failed to deploy and everyone else marked time.

La Sarre advanced and took hits from Los Rios. The following is turn 6. I got a little confused while marking up the photos. 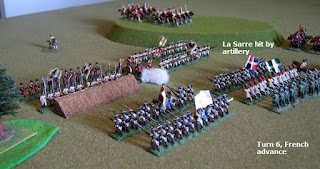 The French CO tried to get the Grenadiers to charge, yellling "En avant!" But through all the racket, they heard "bon vivant" and continued to trade fire with the Austrians. 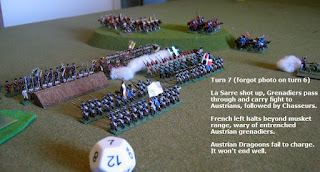 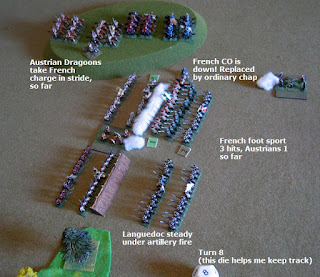 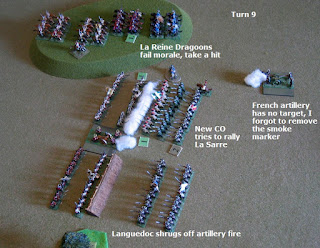 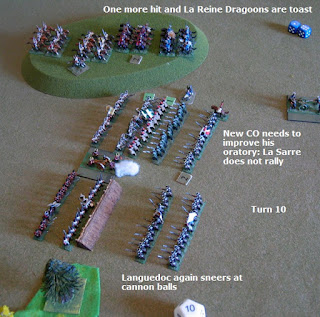 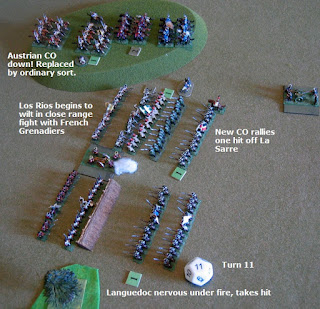 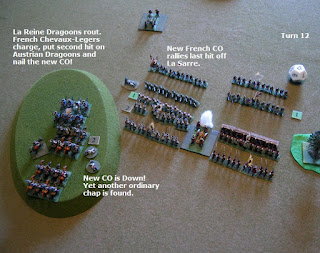 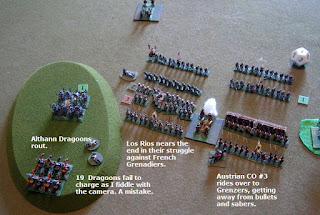 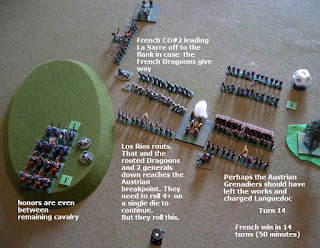 The action was pretty fast, 7 units vs. 8 resolved in less than an hour, including photo time. I find the rules simple without being simplistic and give a good feel. Hanging out just out of musket range seemed kind of cheesy, but another failed morale test or two would have made that foolish.