Thursday evening we played a 400 point game of Musket & Tomahawk with our 15mm figures. I had just completed a scratch-built longhouse in case the Indians should have to defend their village. Needless to say that was the scenario we rolled up. I could have used more. I also just got some Blue Moon Indian villagers in the mail and they are next in the painting queue, so we used a mix of solo Indian warriors and settlers to represent the villagers.

Jay had designed a British mixed force of 399 points; 1 light infantry officer with a rifle, 6 light infantry, 9 regulars, two units of 9 provincials each, 2 units of 6 rangers each and a 6 warrior group of mission Indians, for a total of 52 figures. I was tempted to field an entirely Indian force but since my Troops de la Marine hadn’t been on the table since 2012, I fielded the following force for 400 points: 9 Canadian militia, 12 Troops de la Marine with one Marine officer, 4 groups of Huron Indians, each 6 strong and 1 chief with a talent (guerilla, which was never used) for a total of 47 figures.

After laying out the terrain we rolled for objectives. The British force was set on slaughtering the Indian villagers. We rolled a raid which was then modified per the rules to scouting. We also acquired 40 points of villagers (8 figures) which were placed on the fields around the village. I swapped the stone farm house out for the lone longhouse. 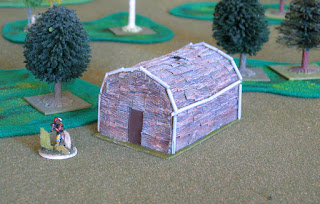 We left the fences up around the fields. It didn’t occur to me until the today to wonder if the Indians used fences. I know larger villages had palisades, but that’s not the same thing.

Jay commanded the British regulars, light infantry (taken as irregulars) and Provincials with Rick leading the Rangers and Indians on the British right. I had the chief and three groups of warriors on our left. Ken, arriving late, got one group of warriors in the center and Bill had the Canadian militia and Troops de la Marine (taken as regulars) on our right. The British started out 8” onto the table while we arrived from the table edge. The first turn saw a run of British cards early on. The light infantry sprinted forward and dropped two villagers in the field with a musket volley. The civilians miraculously passed their morale test. Had they fled the table (1 in 6 chances); the British victory conditions would have been met. In the second half of the turn our cards finally started coming up and I flanked the British right. My first shots were a waste of powder, with a few possible hits that didn’t convert to kills. The turn ended before all of our cards were drawn.

The second turn saw a run of our cards. I kept shooting at the British and my dice came back from the dead. In the picture below the British Rangers are hidden by the trees, proof of their superior wood crafts. Or they recoiled out of camera range.

The Rangers recoiled into the open and fired back, bring a warrior down, forcing my left flank group to recoil in their turn. 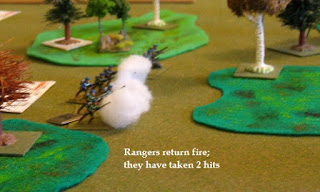 The third turn saw our Indian cards pop up first and the Rangers were cut down in the open. 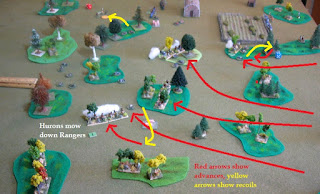 I had 18 figures (counting the chief) on the open British right flank. The British team decided to finish the turn but things were looking bad for them. The Hurons put the Mission Indians to flight. Ken’s warriors returned to their place in the line and scored a long range hit against the Provincials. The British light infantry fired and nailed a Canadian, forcing his comrades to recoil from the fence. 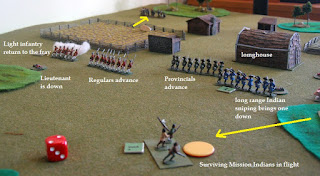 The Brits threw in the towel, since they were highly unlikely to get the remaining villagers (their victory conditions) while we were very close to scouting the remaining sector of the table with our flanking move. British losses were 20 figures, including the officer while we had lost 8 figures (5 Indians, 1 Canadian, 2 villagers).

The game took less than 2 hours. We had a blast. Ken enjoyed his first game. We all noticed that the cards had a lot of effect on the game, likely more so than the dice. Getting a run of cards while your opponent doesn’t makes you feel like a genius, while the reverse makes you feel like the most plodding officer seen in any film. There will be more of this played. Unfortunately for the other Fencibles, this means they will have to hear more of my lousy Magua impersonations. Between the unusual turn structure and how much fun I was having, there are way less pictures taken than usual. Most of the above were taken after the game was well over.

I have to finish painting my last pack of 1877 Turkish cavalry. Then I can start on the Blue Moon Indian villagers, settler militia, dead and wounded, and make some more Indian structures.

I’m off to with my wife for a while. After Thanksgiving we have (via the Bloody Big Battles rules) on tap.
Posted by vtsaogames at 7:06 AM No comments: