We played a couple Musket and Mohawk games Thursday night. A road ran in a U shape around the table, with a rugged ridge within. The supply convoy came on one end of the U and had to get 4 wagons around to the beleaguered Fort Bull at the other end of the U. The wagons were road bound and slower than the infantry. If the Indians contacted a wagon, it was looted and destroyed. We set the first game in a British controlled province. Tom and I played the British against non-player Indians. I figured we have the game down well enough so no one needs to umpire. 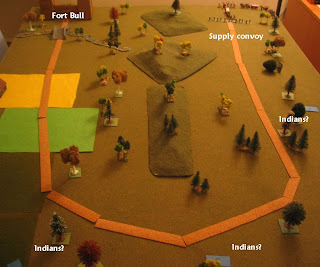 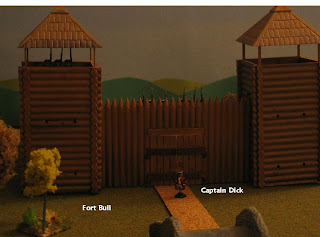 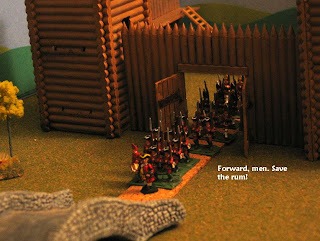 The first game was pretty easy.  The first two Possible Enemy Forces (PEFs) turned out to be nothing. Since we were only rolling one die per revealed PEF, it was easy to do. A company of Troops de la Marine did appear and got into a stiff firefight with my ranger company. Another Indian band appeared as reinforcements on my left flank and I was in some serious trouble for a bit. 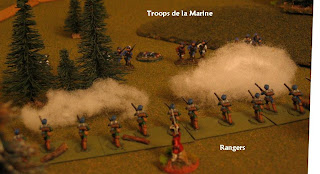 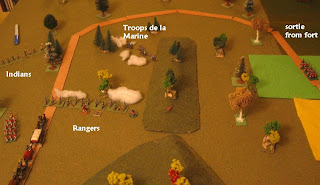 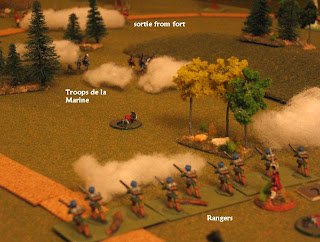 We marched around the bend in the road with regulars and battered rangers out front, the four wagons followed by militia and the company from the fort as the rearguard. 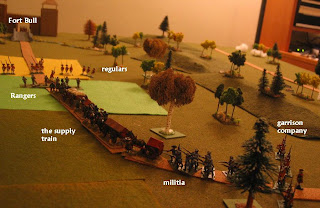 Tom finally rolled up a couple Indian bands as reinforcements, but they came on the opposite side of the table. They managed only to get a couple shots at the rearguard before all of the wagons reached the fort. It was fairly easy and took less than an hour.  British losses were considerable. The rangers lost 50%. But all 4 wagons got through. 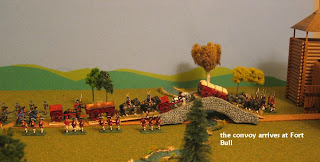 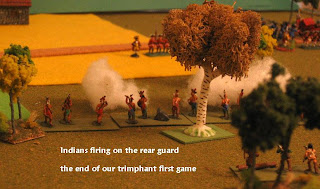 We decided to run the same scenario but with the province under enemy control. The premise was that a previous attempt to conquer the province had ended with a fort beleaguered by the Indians. We were to bring supplies to the fort. And here our troubles began.


A PEF zipped right across the table and revealed an Indian band in front of my ranger company before we made a third move on table. They fired at us and dropped a ranger. I did not fire back because once you do that, you are locked into a firefight. Instead I filed off to the right to flank the Indians, while Tom brought the regulars and the militia forward. The Indian band reloaded their muskets. Now I charged them in the flank. But the Indians rolled hot dice and my charge stalled before contact. Perhaps it was the sight of the four Indian bands revealed behind the target of the charge. They had come from a reinforcing PEF. And the mob of hostiles was behind barricades. It was looking very different from the previous game. Now another PEF came forward at high speed and was resolved as a company of French colonial marines on the flank of my rangers. We fell back. There was still one unresolved PEF behind the large group just revealed. So far there were six enemy units on the table to our three. Gulp. 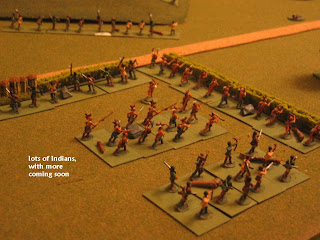 Worse was to come. We got our infantry deployed in a long skirmish line, regulars, militia and rangers from left to right. The wagons were stalled behind the spot where the regulars and militia met. Now the remaining PEF rushed forward and was revealed to be two Indian bands. A couple mobs of Indians from behind the barricades joined them. The regulars fired a volley into them that didn’t faze them. 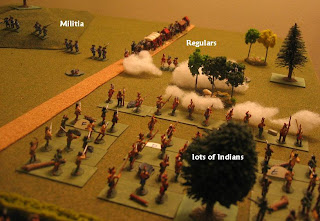 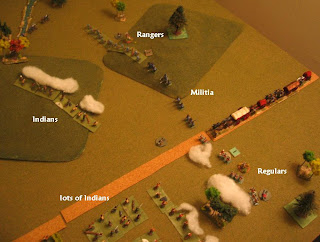 Three bands in mob order charged and the regulars turned and bolted. Our best company was gone. We now tried to get the wagons off the table. On the spot we decided a roll of 5 or 6 would be needed to turn a wagon about. None of the first three managed this. The last one turned around. Then the Indians looted the first two wagons. The last one fled. The third was still unable to turn. Perhaps the teamsters had cut the traces and ridden off. Another Indian band looted the third wagon, just about the time the militia and rangers escaped off the table. 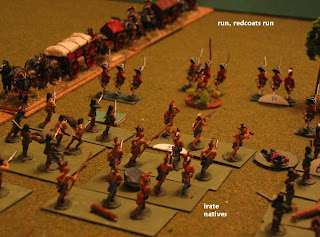 Our losses weren’t heavy but we had been thrashed and our wagon train decimated.  But it had happened quickly so we decided the excited Indians and their French compatriots would try to storm the fort. Reinforcement rolls produced another company of colonial marines and an Indian band very close to the fort. The rolls also produced another pair of regular companies in the fort itself. Obviously the scenario needs some more thought.   The fort should have a set garrison at start. A firefight broke out around the fort. The garrison was taking a lot of hits. We played this for a while and then stopped to discuss the game. 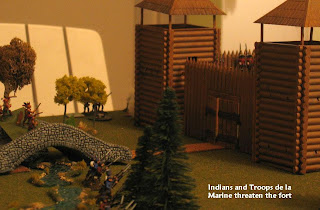 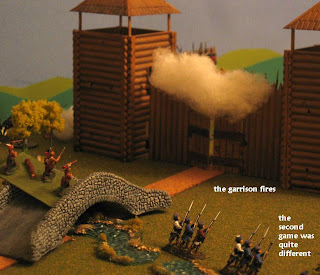 We need to put in some sort of firing factors to better reflect forts and blockhouses.  Right now all cover is equal, so the Indians and French in the woods around the fort were just as protected as the soldiers manning the fort. Also, next time the fort needs to have a clearing around it. The second game ended with almost 100 Indian figures on the table, along with 24 Troops of the Marine and 12 Courers de Bois, some 136 hostiles. The convoy escort was 38 figures, the fort garrison 35.


The bottom line is we played two games in three hours and had a blast. The convoy scenario needs some work, but the games we played reminded me of the fun we had with Little Wars, minus the crawling around on all fours (tough when you're our age) and needing a really big room. We’re talking about running a relief of the fort and perhaps a storm of same. I have ideas to do Braddock’s battle of the Monongahela with these rules. We’re having so much fun that I have not got around to trying the new Drums & Shakos Large Battles Napoleonic rules.
Posted by vtsaogames at 2:46 PM 5 comments: