April 17, 2021: scenario updated based on Buchanan's "Road to Charleston". Details below.

Cornwallis abandoned the Carolinas seeking easier pickings in Virginia. (He would find Yorktown.) Greene headed back to South Carolina to root out the garrisons left behind. British Lt. Col. Stuart offered battle at Eutaw Springs. Both armies were short of provisions. It would become clear the Americans were hungrier. Stuart sent 300 troops out to dig sweet potatoes. Greene’s army was closer than suspected. The foragers were ambushed by Continental cavalry. 60 were captured, the rest scattered until the battle was over. The remaining British and Loyalist troops hurriedly formed up west of their camp.

Greene came on in two lines, militia in the first, Continental regulars in the second with a small reserve of Washington’s Light Dragoons operating with Kirkwood’s Delaware Light Infantry company. A lengthy musket duel ended with a bayonet charge that drove the militia back. The Continentals advanced and renewed the fight. It swayed back and forth but finally most of the British broke and ran through their camp. 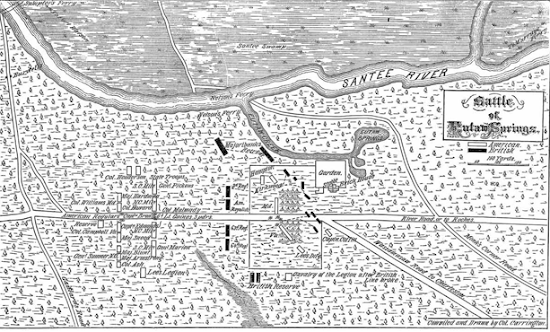 The famished Continentals pursued into the camp and began looting food and drink. Discipline vanished in a twinkling. Marjoribanks’ elite battalion stood firm on the British right and New York Loyalists held the brick house against what few troops Greene managed to get forward. In time the British rallied, recapturing their looted camp from the disorderly Americans. Greene’s losses in killed and wounded were somewhat higher than British losses, but when the numerous prisoners taken before and during the battle are added in, Stuart smaller army lost 692 to 882 (depending on sources) to Greene’s 525 to 579. After some policing up the field, Stewart fell back towards Charleston. This was the last major engagement of the war save Yorktown. Losses on both sides were extremely heavy.

“Loose Files & American Scramble” rules call for each of my stands to represent 30 infantry, 20 cavalry or 2 guns. My collection requires 36 infantry, 24 cavalry and two guns per stand in order to avoid having any British or Hessian troops appear on the American side. As it is, Hessians will stand in for Loyalists and various other substitutions must be made. But they are all from the right war. Some units have been amalgamated for ease of play. The numbers are given below for those who wish to have a raft of tiny units alongside large ones.

Marion’s and Pickens’ militia are rated higher due to their experience and leadership. They fought well at this battle. Technically, Kirkwood’s unit is too small for the rules but my feelings for this tiny band of heroes kept me from amalgamating them with another unit. Ditto Sheridan's NY Volunteers, who played a crucial role in the battle.

Scenario rules: British win if less than 4 American units enter their camp. Otherwise recapturing the camp ends the game in a tie, a pyrrhic victory as in the actual battle. If the Americans capture the camp and keep it, they win a convincing and rare victory. Greene will have a much easier life after the war.

Any American unit that enters the camp will roll a die at the end of the turn if not in combat. On any roll less than 6 the unit starts looting and gets 1 DP. At the end of each consecutive turn, the unit will stop looting on a roll of 6 or if in combat. Add 1 to the die roll if Greene is in contact. Units looting will not fire or move. In combat they count as flanked. If forced out of the camp they stop looting.

If Greene or Stuart are lightly wounded, they go from DAV (score of an average die) for CPs to DAV -1. Another light wound removes them from the game.

* Pickens and Marion are unit leaders. They move with their units, can rally one DP each turn or add +1 in combat. If wounded or worse they are removed from the game.

deploy in the brick house which counts as hard cover, using the the rule below while in the house.

Militia units (3rd, 4th, 5th class) with 50% losses or more flee the field – remove from table. Other units (1st, 2nd class) with 75% or more losses flee. No further DP losses by friends who see this. Clears tiny remnants off the table.

Eutaw Springs is one of the first battles in the American Revolution I ever read a detailed account of. When a young lad, Disney had a TV series based on the wartime exploits of Francis Marion, the Swamp Fox, complete with jaunty song. In the series Marion was a handsome young fellow. He would sneak into occupied Charleston, climb up a balcony and romance the beautiful young daughter of middle-aged Banastre Tarleton. Chased, he always hid behind a tree while British cavalry galloped past. I asked my mother for a book about Francis Marion. She got me one, a young adult’s history. The book revealed that Tarleton was a young man in his twenties and Marion was in his forties and not particularly handsome. This was an early lesson about the historical accuracy of Hollywood, learned at age 10. Years after another book, The Road to Guilford Courthouse, informed me that the one time Tarleton went after Marion in earnest, Marion and his men ran all the way to North Carolina. But they did escape. Eutaw Springs was the one stand-up battle Marion and his partisans ever took part in and they acquitted themselves well. I’ve been looking to stage this for many years.

A couple days ago I decided to give the “Loose Files & American Scramble” rules at shot at the Camden scenario. We last played these rules in 2005, not sure why we stopped though we went through a period of writing our own rules, since abandoned. These fine rules are available here  for free.
I decided to play Loose Files as written, minus our house rules. A bit rusty, I had to look things up as the game progressed. The deployment and opening moves are below. I amalgamated several infantry units to avoid having tiny infantry units. It can be done the other way if you prefer. 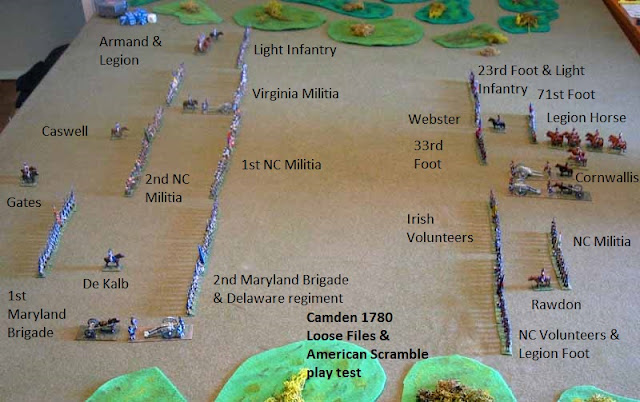 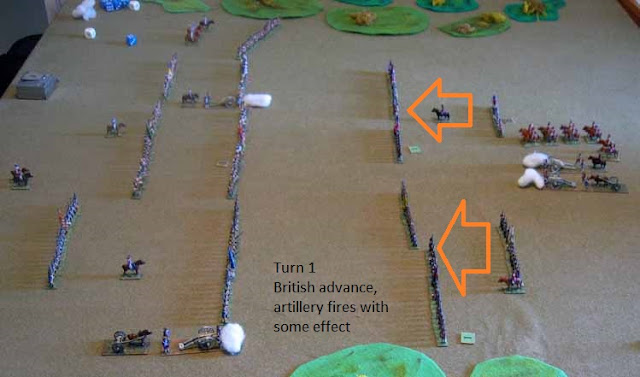 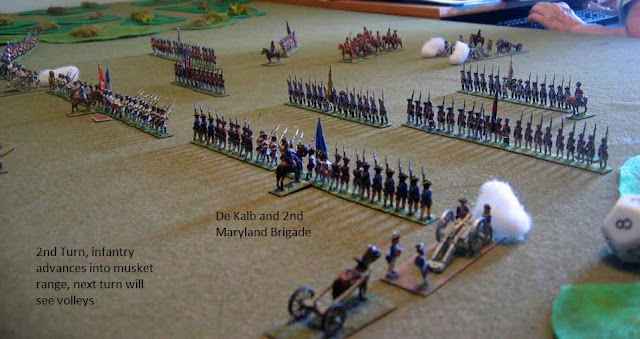 The crux of the game is Disorder Points (DPs). The more a unit has, the worse off it is. Rallying them is important. Better troops get rid of them faster and leaders can use Command Points (CPs) to remove DPs. A more detailed look at the 3rd Turn follows to illustrate Rallying. Lord Rawdon gets 3 DPs. He spends one to move DAV (score of an average die in inches) to contact the unit that requires help. He then uses his remaining 2 CPs to remove a single DP from the North Carolina Volunteers / Legion Foot. 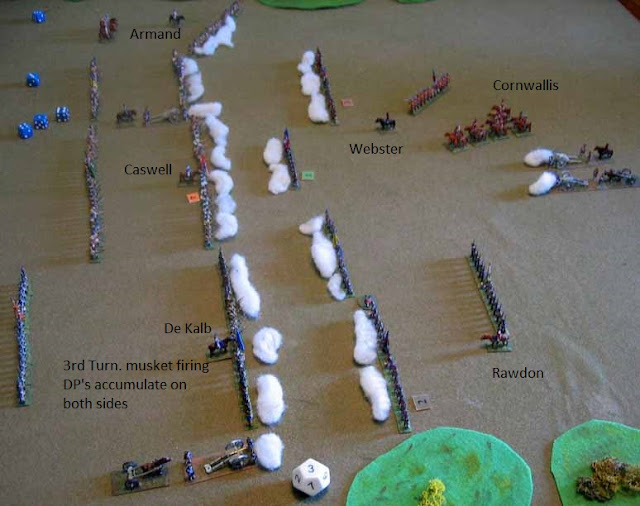 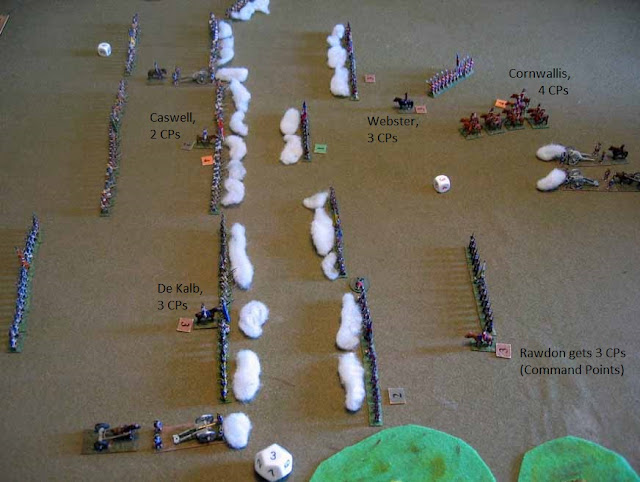 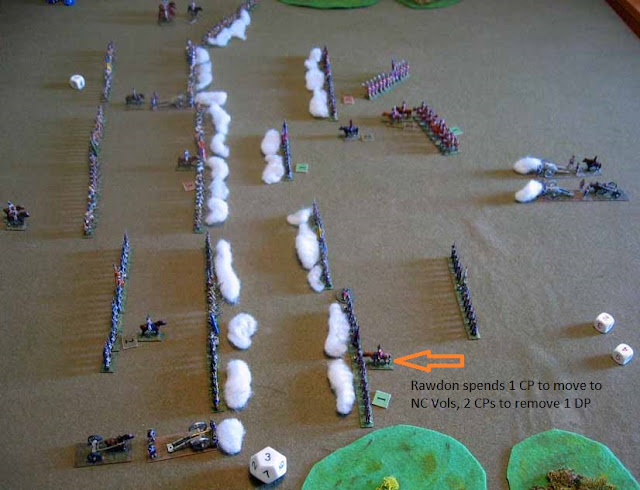 On the 4th turn Rawdon was lightly wounded. The rules call for the loss of 2 CPs. If that is for the rest of the game, then a brigade CO gets 1 CP per turn which is useless. I decided it was for one turn and if Rawdon got another light wound, he would be out of the game. It seems that leaders who attach to units then move with them. It specifies leaders with a unit beaten in close combat do so. I think it should be for all cases, otherwise having a leader participate in a charge to inspire the troops is nigh impossible. 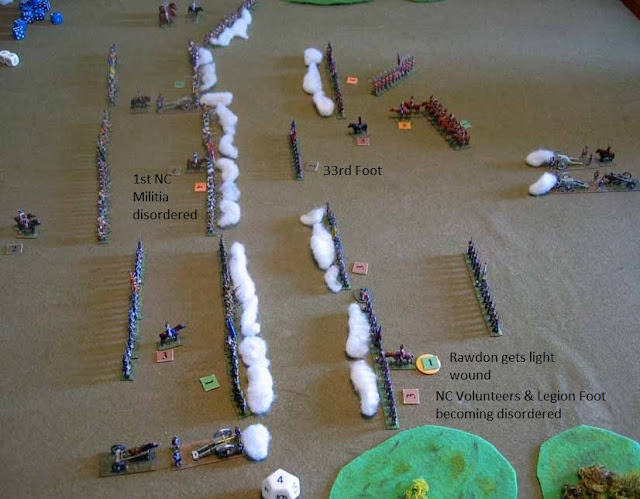 A small good unit in good order can beat a larger disordered unit of lesser training and morale. 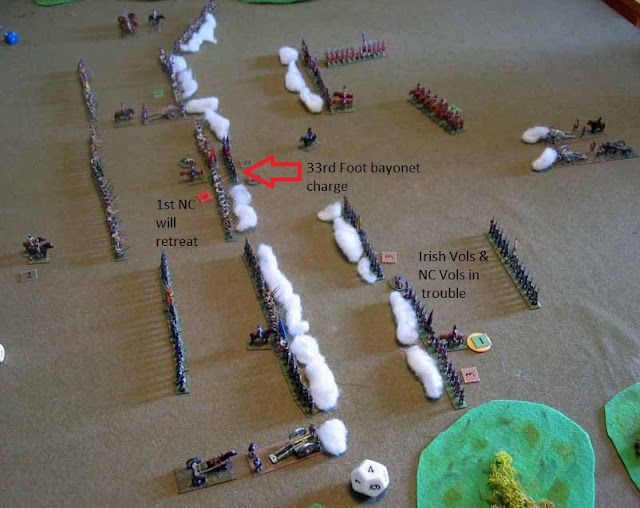 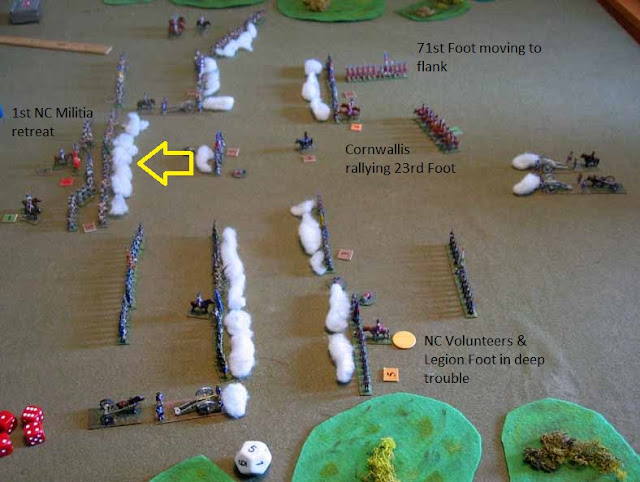 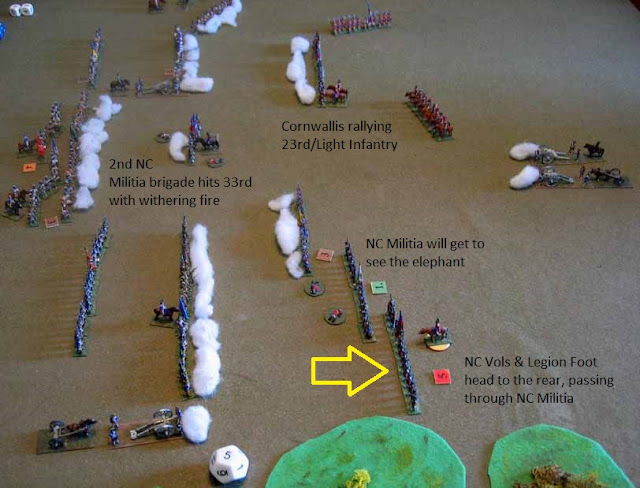 Here I erred. The 23rd Foot & Light Infantry got a musket effect against the artillery supporting the Virginia Militia and removed the crew. The artillery should have received a DP. This would have made them less effective in fire but would not have saved the Virginians from the bayonet storm to come. It was that lop-sided. Armand’s Legion cavalry hit the 23rd / Light Infantry in the flank but were seen off with losses. A tiny unit became a miniscule cipher. 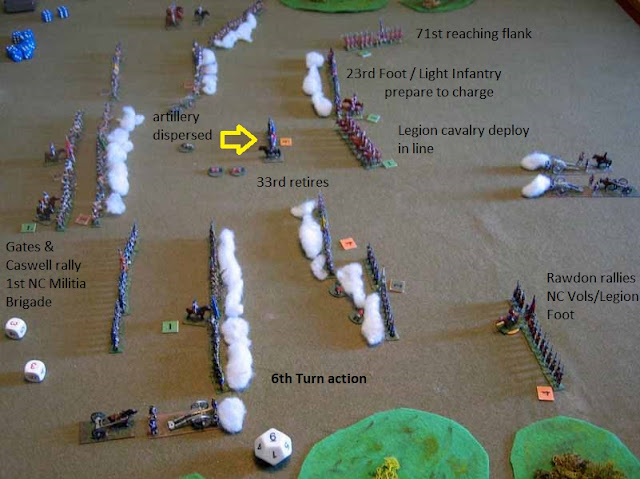 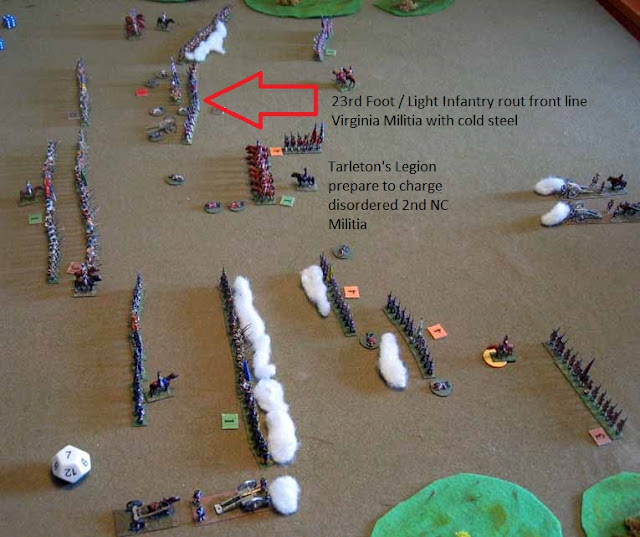 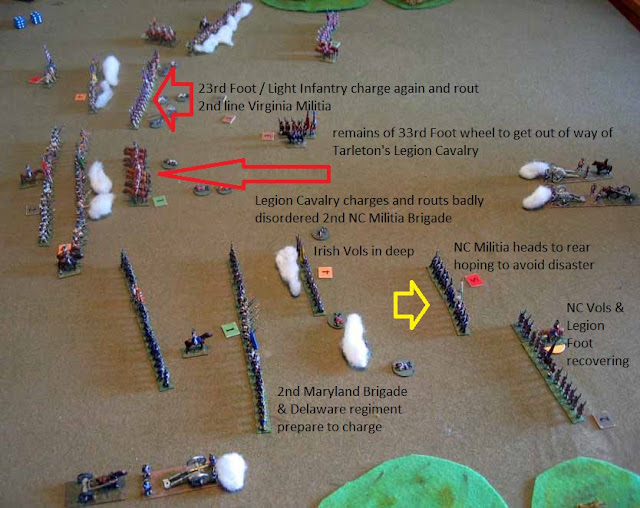 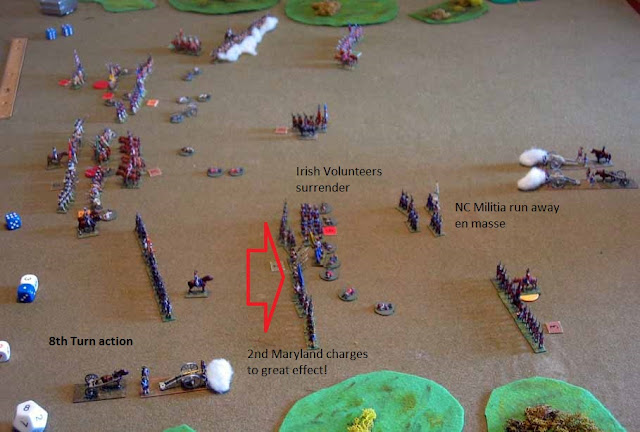 The next photo is the only one showing the game mat at almost the right color. 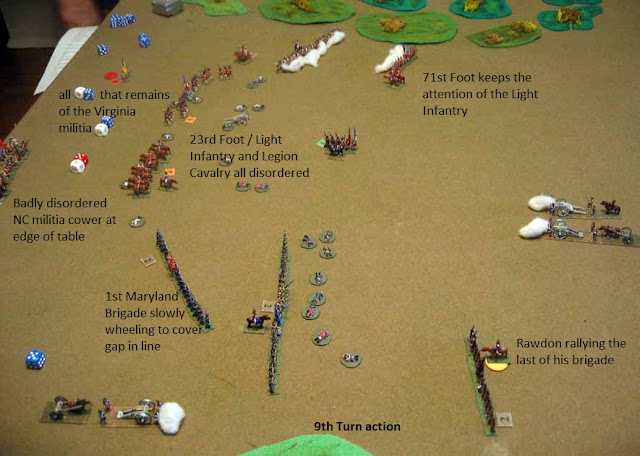 The British left collapsed as the Rebel center was smashed in. The British in the center were pretty much disordered by their success. De Kalb’s brigade was in reasonable shape though the NC Volunteers/Legion Foot were also getting back into fighting trim. The British artillery now had a clear field of fire once the prisoners and deserters cleared out. I had played 9 turns in about 3 hours and had to leave the table. I intended to return to the game but after two days I decided to write the report instead.
The game at this time would be a race between the slowly wheeling 1st Maryland Brigade and the recovery of the victorious British units in the center. The elite 23rd Foot/Light Infantry would be able to shake off 4 DPs in two turns. The Legion cavalry would likely have to fall back somewhere safe to recover.
Continental losses (of 59 stands of troops/artillery) were 1 artillery stand (in error), 11 infantry hors de combat and 10 ran away, including the command stand of the 1st NC Militia Brigade, and 1 cavalry stand. A scenario rule would have Gates quit the field when a second such command stand was removed. It was close, but not worth any extra effort since Gates is no great threat. Crown losses (of 38 stands) were 6 stands of infantry, 4 (the Irish Volunteers) taken prisoner and 4 (the NC Militia) ran away. Panic is infectious in these rules. It’s one of the things I like about them.
Another playing error: in addition to affecting firing and close combat, DPs also have an effect on movement dice, -1 from each die score per DP. I forgot that.
(That isn't true. This rule comes from Sharp Practice, not Loose Files.)
There are a couple vague things in the rules that players will need to sort out. There is one mention of orders, which take effect next turn. No further explanation. I have found orders a can of worms over the years. Players expect orders full of “if”, “when”, “depending” to be telepathically executed. Lord Cardigan muffed an order that had no conditions at all. But his sweater was marvelous. I am leaning toward simple brigade orders as found in the “In Deo Veritas” rules; Advance (at least half units move closer to enemy, may charge), Hold (no movement closer to enemy than own front line, no charges), or retire (half units must move away, no charges).
I have always had fond memories of Loose Files and this game has rekindled them. I can’t imagine using anything else for the American Revolution. If and when our club can return to face to face games, Loose Files will be played. For those wondering about the title, Lord Howe instituted a change to British infantry drill in 1776 that was in effect during the rest of the war. Rather than 2 or 3 close order ranks, troops were to form into two loose order ranks. Had the two ranks coalesced, it would have been the same as a single close order rank. This looser formation was enabled because a wall of bayonets wasn’t needed to fend off heavy cavalry; there was none in the New World. Had any showed up, operating in the close terrain would have been an issue. The formation was fast and flexible. Loose Files and American Scramble was the term was used by British proponents of this order opposed to the Brtish fans of Frederick the Great’s Prussian army drill book.
The order of battle used is below. Number in parentheses is CPs per turn. The game calls for infantry stands = 30 troops, cavalry 20, artillery 2 guns. I doubled all of these, hence 60 infantry, 40 cavalry, 3 or 4 guns.

Armand's Legion and the Light Infantry have been down-rated to reflect the beating they took during the night at the hands of Tarleton's Legion Cavalry.