Yesterday evening the Fencibles played a scenario of the first 6 days of Bonaparte’s 1796 campaign in , the Dego phase. This scenario is unusual, with 8 turns representing 6 days of combat and some modifications to represent the much larger scale. Some may say it is more like a board game. That didn’t bother us at all. The figures are 15mm; the French are in correct uniforms. The Austrians are wearing the pre-1809 dress with leather helmets. No, I don’t plan to buy and paint Austrians with casquets. The Sardinians are actually Seven Years War Hungarians. If that offends you, read no further. We figure close enough is good enough. Allied units and leaders are in italics in the photos. The sharp-eyed may notice the houses move around during the game to villages not currently occupied with troops.

The first game started just after . 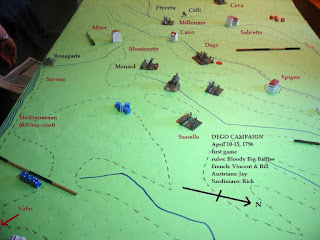 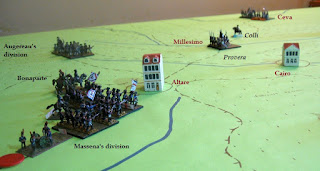 And our lousy dice against hot enemy dice made their first appearance. 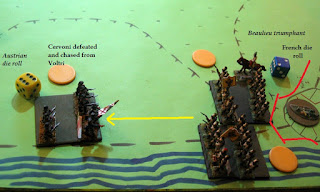 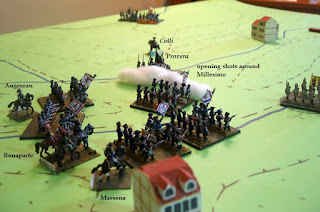 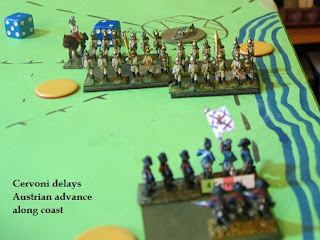 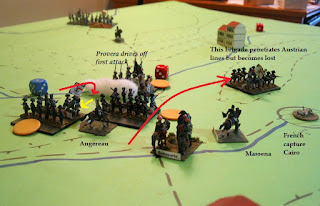 Actually, the brigade wandered for one day (low movement dice). It felt like more at the time. 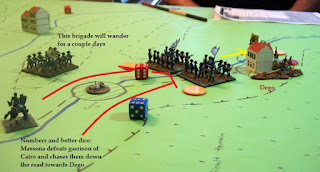 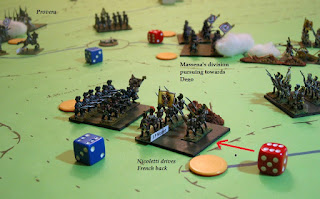 And then Dego fell in a nasty series of fights. 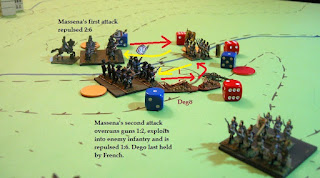 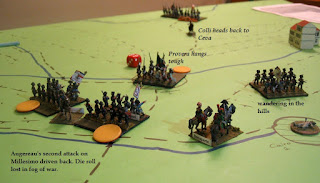 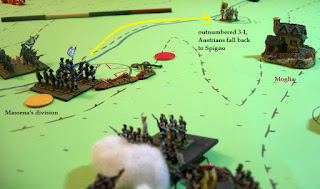 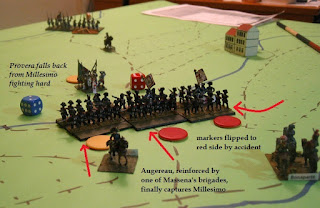 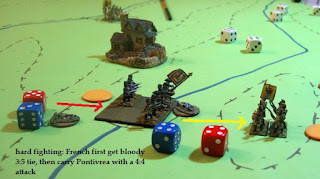 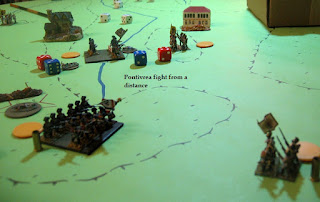 As the game wound down… 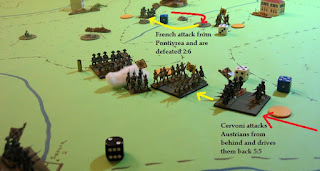 Wukassowitsch had spent days lolling around the coast. Beaulieu arrived had them form up and then they struck with a vengeance. 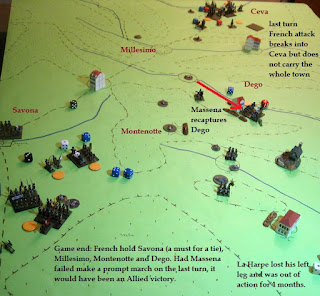 The game took about 2 hours to play 8 turns. It was a tie but almost an Allied victory. The game saw lousy French combat dice against hot Allied combat dice, though Allied marching was abysmal and the French marching was quite speedy. French losses (higher than actual) were 7 stands of infantry with 1 run off, an artillery unit and La Harpe. Our house rules for officer casualties determined that he lost his left leg and was out of action for 4 months. Allied losses (slightly less than actual) were 7 stands of infantry with 2 run off and 1 artillery unit. Andrew arrived to see the last turn and we broke for dinner.

After dinner we switched sides and played again.
Andrew commanded the Allied offensive along the , no doubt battling hordes of paparazzi along with the French. 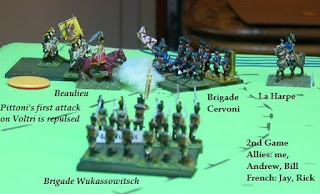 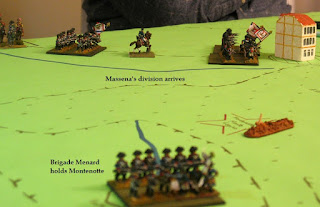 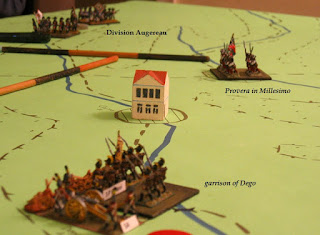 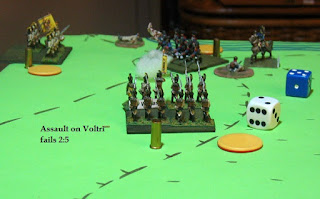 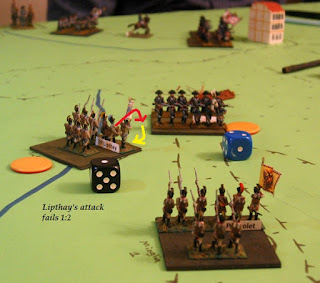 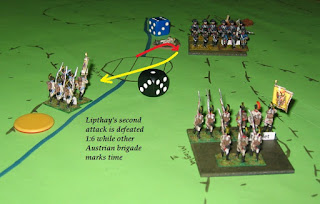 The Austrian threat to Montenotte was squashed. 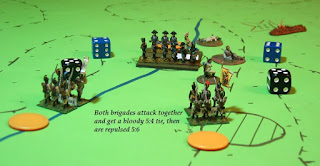 The drive on Ceva continued. 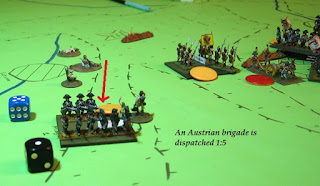 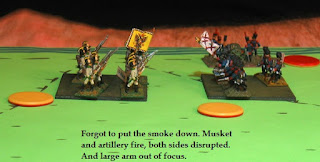 Captions are wrong in next picture, Dego was contested by both sides. 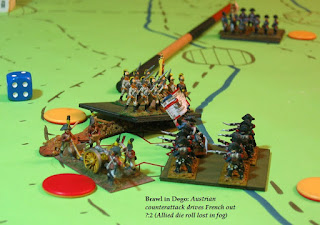 Now the town was recaptured from the French. 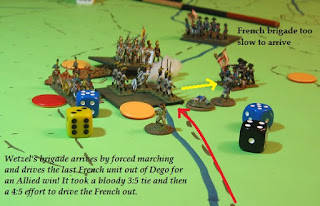 I missed getting photos of the action around Ceva. Two assaults were launched. The first frontal attack failed, driven back at bayonet point. The second attack was weaker and stopped by withering musket fire. Had the French captured Ceva (a long shot) it would have been a French victory. The French did have two attacks. We only managed one in the first game. As it was, the Austrian recapture of Dego gave us an Allied win.

The game took two hours and three minutes to play. French losses (much higher than actual) were 10 stands of infantry with 1 run off.  La Harpe was badly wounded and out of action for 6 months. Massena was stunned badly when struck by a piece of his aide’s head and not really quite right for 4 days. Allied losses (less than actual) were 7 stands of infantry, 2 run off and Beaulieu badly wounded, hors de combat for 3 months.

My analysis of the second game isn’t as clear. Perhaps this was a feature of wine Bill brought for dinner. Jay also brought a bottle. It will keep until next time. Thanks to both.

All enjoyed the game. It was a series of small fights, much depending on who actually arrived in a timely fashion. There are rumors of more of these in the works from Chris Pringle, designer of BBB rules. We look forward to them.

We won’t be having another game until three weeks hence. Tickets to see Mark Rylance are worth the delay.
Posted by vtsaogames at 9:44 AM 3 comments:

I have been slowly painting up some new figures. Since weather and the local subway system conspired to postpone the game scheduled yesterday, I decided to post the pictures today in lieu of an after-action report. The figures are for two different projects; yes, I can't stay focused on one.

First up are Essex French Revolutionary command figures. I had some 60 old French bicorne infantry from the 70's in my closet and painted them up a few years back. They are true 15mm and looked rather silly when mixed with larger French command stands from a slighter later period. So I purchased these figures from Essex and paper flags from Maverick. The Essex figures are more detailed than the old figures, but much closer in size. At this scale the difference between plain flags and "effect" flags is negligible. The 14th Demi-brigade has plain flags. Can you tell?

The remaining figures are Blue Moon for French & Indian War skirmish games using Muskets & Tomahawks. Our last game saw a mixed British force bent on wiping out an Indian village. Of course, we had no villagers painted and had to use settlers. Next time, we will have proper Indian villagers. I may add a few brighter blankets/cloaks at some time in the future. As you can see, these are nice figures. My painting will suffice.

Last are frontier militia, the very chaps who might be seeking a village to eradicate. Or defend their own settlement against a similar raid.

Hopefully next week will see the after-action report from the first week of young Bonaparte's 1796 campaign in Italy.
Posted by vtsaogames at 8:08 AM 2 comments: