I finally finished painting and basing my Parthian Army of 15mm Khurasan Miniatures. The process was drawn out by trips out of town and painter’s block. But here they are. I don’t have any Daylami or mountaineer infantry, since none were listed in the Parthian online page. Should I need some I’ll use Dark Age barbarians until I find a good source for figures. Some of my DBA armies don’t have all the options. This is one of them. We’ll see how these lads fare on the table when next we get around to DBA or Basic Impetus. 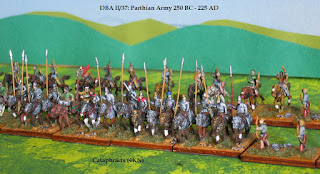 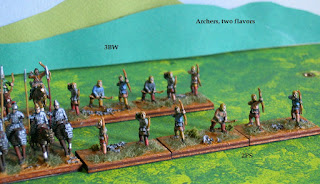 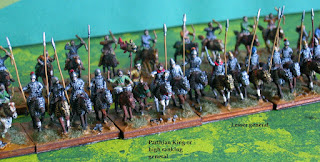 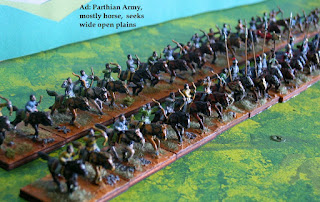 They will share my toothpick camps with their 15mm brethren. I don't have enough storage space for each army to have their own camp. I barely have enough for these lads.

Back to the Vendee with Rebels & Patriots

Last Thursday we got around to playing a rematch of our skirmish in the Vendee. The previous game report can be found here. The rules are Rebels and Patriots. After that game I decided to get rid of the wheat field and all green unit ratings (except the free unit) to speed the game up. In truth, there are quite a few units on the table for R&P, which usually has 24 points a side or less.

I had wished to play the Whites last game and did so here, planning on showing how to play the angry peasants armed with a mix of muskets and pole-arms. But then my last attempt to demonstrate proper cavalry tactics during our Seven Years War game didn’t quite work out.

The defending Whites, Catholic royalist peasants, are led by their noble, Sangre Bleu. His character trait is “familiar face” which allows a free line infantry unit of locals who join the cause and have no effect on force morale.

The attacking Blue revolutionaries are led by the townsman Parvenu, said by the Whites to be a Huguenot. His trait is “blessed”, strange for the chap leading the atheist side. Perhaps he is a secret believer. It makes him harder to kill. Parvenu gained 6 honour points in the last game. The Blues are tasked with taking the hamlet of Sacre Coeur and teaching the locals a lesson.

Victory points: 3 points for control of the hamlet of Sacre Coeur at the end of the game, 2 points for losing less than 1/3 of your force’s points, 1 point for causing at least 1/3 point loss to the enemy. 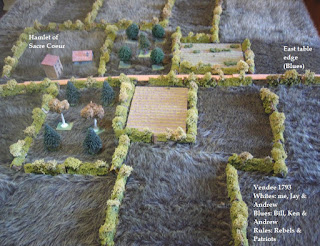 A short recap of the fight is that we spent the early part of the game trying fancy footwork, skirmishing up to the hedgerows and then falling back. We got shot to ribbons for our efforts. Late in the game we discovered that charging the enemy was our strong suit, but found out too late to turn the tide. Pictures follow. (Line infantry units with dried cherries have not yet fired or been in melee.) 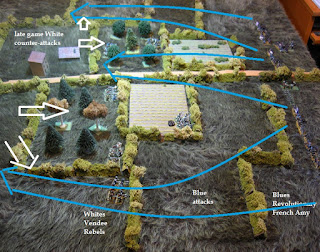 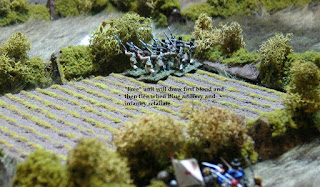 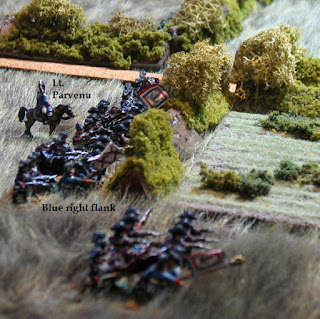 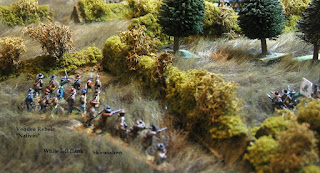 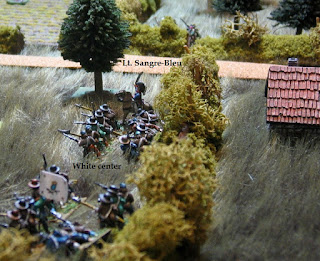 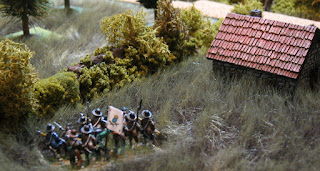 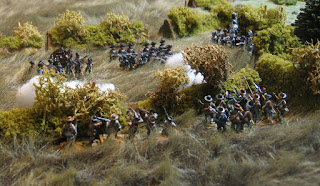 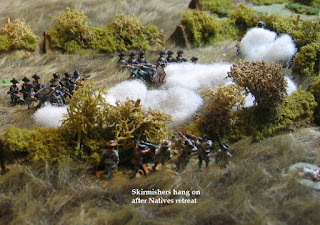 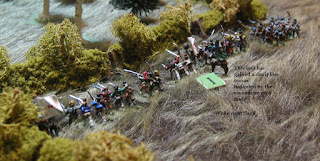 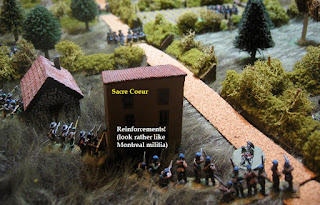 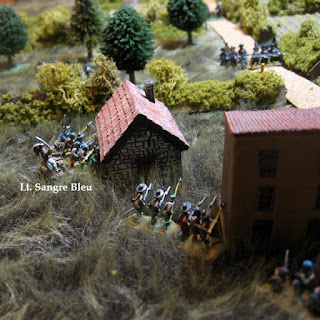 Rolling boxcars during an activation gets you good things; rolling snake eyes punishes you. Andrew arrived after he got off work and got command of a reinforcement unit that arrived from a boxcars roll. He promptly attacked and destroyed Blue skirmishers who had infiltrated past the hamlet; they failed to evade. We broke for dinner, a fine chili verde prepared by my wife. After dinner Ken said he would be going soon, so Andrew switched sides. He’s been away for a while, with his kids taking turns with colds and such. He made up for lost time with aggressive play and some hot dice.

Jay and I had been pressed back towards Sacre Coeur, taking losses from Blue firepower as we went. My theory about using skirmish mobility to offset Blue musketry was failing badly. With our backs against the wall, we launched charges and found the native troop type quite formidable with cold steel. One of our units gained a discipline advantage termed “fighting cocks” via a boxcars roll and got a vivandiere figure as a marker. One of Andrew’s also got one. I looked for the plastic rooster my wife gave me when we were playing games of Marengo but could not find it. Andrew’s unit was marked with a plastic mouse my wife had given me. Andrew roared about the ferocity of said mouse, causing hurricane gusts of laughter. Bill now rolled an activation snake eyes and fired on one of his own units, causing a couple hits and more laughter. We laughed too soon as a similar result saw our unit in the hamlet fire on friends. 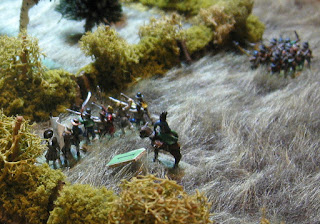 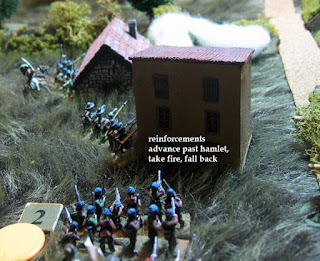 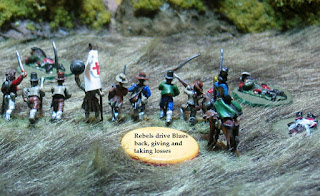 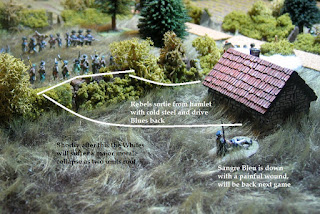 Andrew’s fierce mouse unit was driven back twice in a turn by angry rebels who then failed a morale test with truly lousy dice and routed off the table. 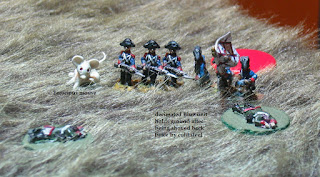 In the ensuing turn the Blues opened fire on the rebel units that had cut their way into Blue lines. Some routed, causing more morale tests and a general collapse. We escaped ignominy for our leader on a snake eyes roll because he had already been carried from the field wounded. We threw in the towel.

The game took about three and a half hours during which we played 13 turns. Jay suggested that a time limit of some sort be put on the scenario. It has none at this time. Since the rebels have lost both games, he may have a point.

Royalist losses were 3 native units and 1 skirmisher lost for 14 points of 29, over 1/3 points lost, the CO wounded, 34 figures shot and another 32 ran away (including 9 “free” ones). The Blues lost a line unit and a skirmisher unit for 6 points of 36, 24 figures killed or wounded and 9 ran away. A couple of the last were likely taken prisoner.

The Blues took the town, lost less than 1/3 points and caused more than that to the enemy for a total of 6 honour points, giving CO Parvenu a campaign score of 12. 8 more will see him promoted and gain a new trait. Poor Sangre Bleu recovered from his wound but gained no points. His score remains zero. Perhaps next time he can do better. A new scenario might help. Perhaps a raid on Blue supplies…

I intended to teach a lesson in how to use the Vendee rebels and instead was taught one. They need to close with the enemy as quickly as possible with a minimum of musket fire. I don’t know enough about the actual fighting to know if this represents the way they fought, but certainly seems like the way Highlanders of the ’45 rising fought.

Rules details for game geeks: a native unit in good order that charges a line infantry unit in the open will roll 12 dice, needing 4+ for hits, 2 hits per figure loss caused. The odds call for 6 hits, 3 figures removed. The line unit rolls 12 dice needing 6 for hits. Odds call for 2 hits, one figure lost. The line falls back and both check morale. if the natives pass, they can follow up and do it again. That’s pretty strong stuff.

If the natives charge a line behind an obstacle (like a hedgerow) they roll 12 dice as before but need 3 hits to remove a figure. They should cause 6 hits again, removing 2 figures. The line as before should cause 2 hits, removing 1 figure and thus lose the fight. Again, if the Natives pass their morale check they can follow up and hit the line in the open, unless the line manages to fall back behind another obstacle.

Getting into position for a charge without being hurt by superior enemy firepower remains a problem. I knew natives had an advantage in melee but didn’t realize how strong until we charged in desperation near the end of the game.