We have played 1859 a lot over the years, using the Bloody Big Battles rules. It is a short, fast scenario pitting a small, aggressive French force against a larger, clumsy Austrian army. Andrew has never played it before. He chose to command the lumbering Habsburgs. The dice were extremely kind to me on movement rolls and in assaults. My few lousy rolls were in firing, which is less potent in this period before breech loaders. Every turn that the French can launch an assault on the Austrians (even if stopped by fire) keeps the Austrians from rolling for optional reinforcements. Basically, it represents the French bluffing the Austrians. I was able to launch assaults for the first 6 turns of this 7 turn game, a first.

Uniform purists are warned: the French are in 1870 uniforms and the Sardinian cavalry are actually French Chasseurs d’Afrique. Austrians wear a blend of 1859 tunics and 1866 overcoats. If that doesn’t make you blanch, read on.

There are 4 objectives. If the French hold 3 at the end they win. 2 garners a tie, any less is an Austrian victory. 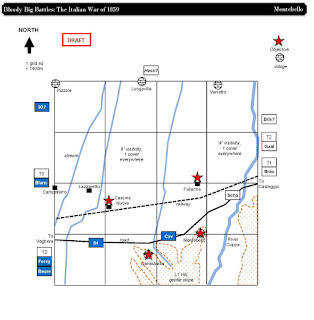 After dinner and the excellent beer Andrew brought, we began the game. It opened as usual with Sardinian cavalry charging down the road into the arriving Austrians. Fortunately for me, the 84th Line marched down the road at full speed, reaching the outskirts of . This would prove to be critical. 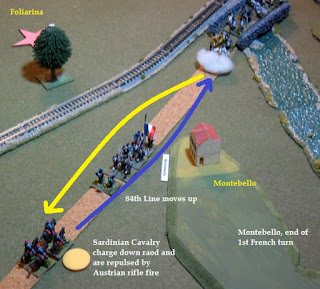 The Sardinian cavalry not only survived but would prove heroic. The 84th deployed and took possession of . 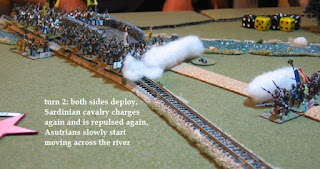 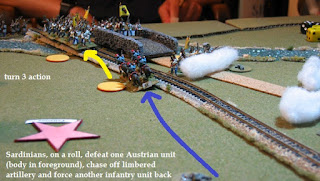 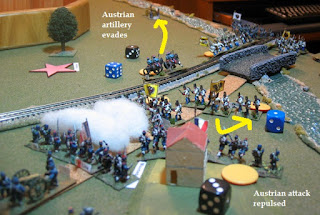 In the excitement, I forgot to bring on my turn 3 reinforcements, the 98th and 91st Line regiments. They would arrive on turn 4. 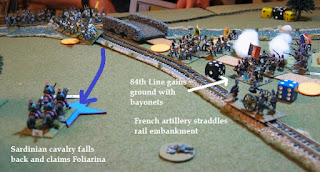 The 98th moved up but most of the fighting was being done by the first two French regiments on the field and the cavalry. The cavalry marched to the right and laid claim to Genestrello. It had previously been bypassed by the hard marching French infantry. The 91st regiment occupied the previously bypassed Cascina Nuova. In previous games the French have forgotten to take some of these towns and had possible wins become ties. (EDIT): it turns out that I was using an old draft version of the scenario. Two of the objectives, Cascina Nouva and Genestrello, start off controlled by the French and Sardinian Allies. 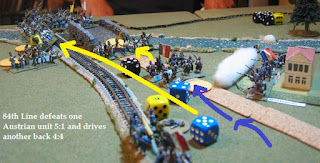 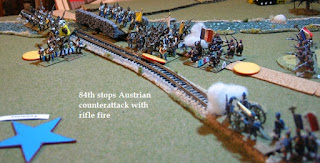 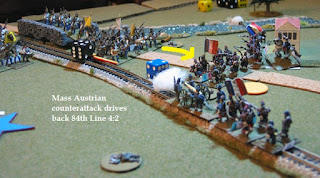 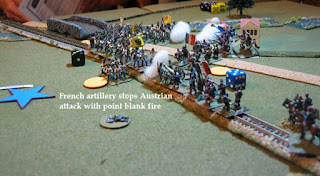 The Austrians were finally able to bring on an optional reinforcement on the last turn, too late for it to get into the fight. They also finally began to flank the French, too little, too late.

Here’s a close-up of the scrum around , held by the French at game end for a win.

We played 7 turns in 106 minutes, a little over 15 minutes per turn. A bit of time was due to my old Canon getting cranky. It may be time to look for a replacement. Too bad my cell phone doesn’t fit on my tripod. The Austrians lost 3 bases of infantry, the French none.

I made some errors: the 74th Line defeated a raw Austrian unit. That unit should have been marked as spent since it lost a base. Also, bringing on the reinforcements a turn late was a mistake. I think that was all. Hopefully as umpire I won’t repeat these.

remains one of our favorite games. It requires nearly suicidal aggression on the part of the French.

We played a scenario of Muskets & Tomahawks last night, 300 points for each side. Bill commanded the mixed British force with a mission to protect the civilians in the settlement. Rick commanded the largely Indian force with a mission to scout all six quadrants of the table. I umpired. We got off to a late start. Bill was delayed in transit by the closing of the ; Rick had firemen in his building. Fortunately there was no fire, just a spot inspection of another building that somehow involved his too. The game began, an hour or so later than usual.

Bill had Lieutenant Fussbudget, 9 regulars, 9 provincials, 12 rangers and 6 Mohawks to protect 15 settlers. They deployed as seen below. The Provincials and the officer were kept in reserve per the scenario rules. Both failed to arrive on the first turn. 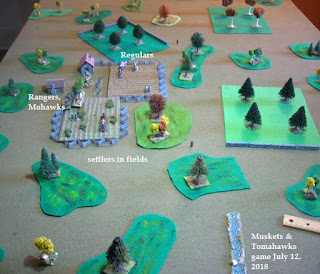 Rick had Lieutenant Petit, 9 Canadian backwoods militia, Chief Lisping Turtle and 24 Abnaki warriors. All arrived from the right side of the table during the first turn. Firing broke out and units on both sides gave ground. 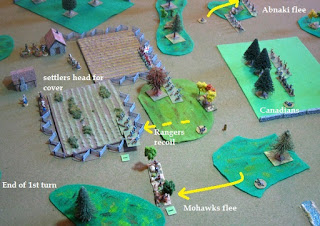 The firing picked up. The Indians fell back on their left flank, the whole force inclining to the right. Deadly fire from the Canadians and Abnakis sent the regulars back in flight. 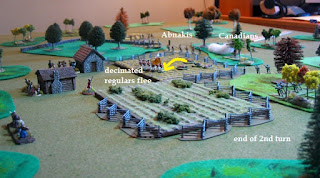 Lt. Fussbudget got his knickers in order and arrived on the field. The Indians continued to incline to their right, overlapping the British left. The regulars reformed and continued to fire at the enemy from an open field.

Andrew arrived and drew the activation chits out of our large teacup. The Provincials finally found their way onto the field. The regulars fell back in order after taking the worst of a firefight. The French Canadians charged a ranger unit and wiped it out. Bill’s dice also went cold on his right where the Mohawks charged a beat-up Abnaki band and were driven off with heavy loss after a prolonged melee. His spirits were low. At the end of the 4th turn he rolled for game end and got it. 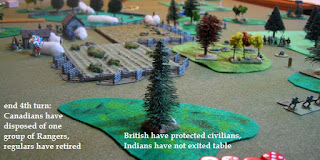 He had at least half of his civilians safe; in fact he hadn’t lost one. His victory conditions were met. To his surprise, Rick didn’t make his victory conditions. Rick's Indians had scouted all 6 quadrants of the table but had not then exited the table. I attribute this to his late start on scouting the far left quadrant, possibly due to his being distracted by the combat going on in the center. We had played 4 turns in something over 2 hours. M&T turns go one for quite a while; a lot happens in one turn. Indians, for example, might move 24 inches in a turn though they usually stop to shoot at the enemy along the way. Bill had accounted for 10 enemy warriors. Rick had laid low 18 British, one short of forcing the British morale chit into the cup.

We broke for dinner and the usual bull session. Bill and Rick departed. I introduced Andrew to the venerable and grand board game 1759. He got close to victory as the British in his first game, giving me some anxious moments. Perhaps I can find a first edition game in good condition, since my old copy is really battered.

Unlike previous games, I didn’t overlook some rules. This leads to one observation. Indians have the Native trait, which means they get an additional modifier when shot at while they are in woods. But this only comes into effect when shot at by Rangers, other Indians and such since ordinary mortals shooting at targets in woods generally only hit on a roll of 6. 6’s are always a hit, so the extra modifier doesn’t buy much for the Indians.

French officers do not include one that can keep up with the Canadians, while the British can have Major Rodgers, for example. I should think Lt. Beaujeu should be an option, a backwoods officer dressed pretty much like an Indian and moving like one.

Correction: There is a Canadian Officer listed on another page from the French Officer, my bad. So we can have Lt.s Beaujeu and Langlade and their like in future games.

We will likely play another M&T game in a couple weeks and then get back to more serious fare with Bloody Big Battles. A last Young Bonaparte scenario beckons (if I can draw a mat for it), and the perhaps the American Civil War. I do at some time want to test a scenario for Stones River.