The Genesis of Junta

Over the years I have read online posts by miniatures gamers who talk of putting the coup phase of Junta on the table with toy soldiers. That amuses me because Junta stems from a couple toy soldier battles played back in the 70s. 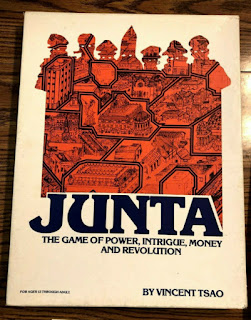 The two games were based on my imperfect knowledge of the 1848 revolutions. Our game presumed the rebels had to dislodge the government forces. Years later I found that if most of the populace stayed in the streets that the government would back down in time. Then the rebels would fall out, working-class radicals against middle-class nationalists and such. In time the government forces would return and reduce the radicals, applauded by the nationalists, until the time came to deal with the nationalists, etc. Most actual fights saw government forces attack barricaded rebels. Our games had it the other way around and the forces of law or repression (depending on your point of view) triumphed both times. We usually had one government player with regular troops and three rebel players with large mobs, poorly trained and treated as 1 in 4 armed with carbines, representing bricks, stones and the odd firearm. The three factions were Nationalists, proto-communists and Anarchists. Our table was the capitol city of the fictional province of Snurdia which desired freedom from the Habsburg yoke.

During the second game, my red mobs were shot down in heaps while failing to storm the post office. The Anarchists briefly wiped out a horse artillery battery before falling to a charge of uhlans. The Snurdian Nationalists had been stymied in an uneven firefight. The Habsburg player offered to make the Nationalist player a prince if he changed sides. That player, a Diplomacy fan, was not happy to find the game had no rules for switching sides. He was disappointed enough to cause me to think about making such rules.

Some time later I came up with a board game that had a hex map of a city and small forces for each player. It had simple ranged combat and melee rules, very much a standard hex and counter game. Changing sides was a given. The guys liked it. Each coup took up most of the evening. I noted that what people really liked was the skullduggery. The coup needed to be shorter.

An area map pretty close to the current board and counter mix did that. By now there was hardly any game there at all. First came the money deck and then the political cards to beef it up. A few years of testing yielded the first edition. It was always a howl. One friend’s wife became so proficient at assassination we termed her Evita. I don’t have proof but do believe that Junta was the first board game to include assassination.

The game was published by Creative Wargames Workshop in 1979. A few years later the game was purchased by West End Games. I’m not sure who is publishing it these days. My absolute favorite game box cover is the one for the German edition, seen below. 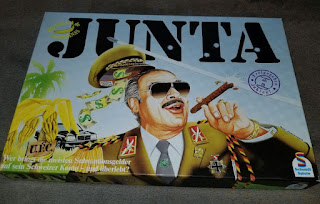 I’m unable to answer rules questions about other editions of the game. The rules were changed and the rulebook is a bit longer than the first edition. First edition rules were laconic, the new ones a bit chattier. My attention span is short and gertting shorter with age.