Between Rome and Parthia, an exhibit at the NYC Metropolitan Museum of Art

The exhibit “The Wold Between Two Empires” at the NYC Metropolitan Museum of Art closes Sunday 6/23/2019, tomorrow. If you can go, do. If you can’t, here is a small taste of what was on display. You might contact the museum to see if you can get the catalog for the exhibition. It portrayed the art and history of the Mideast during the period when it was between the mighty Roman and Parthian Empires. I apologize for the poor quality of the following photos, taken with my cell phone and no tripod. 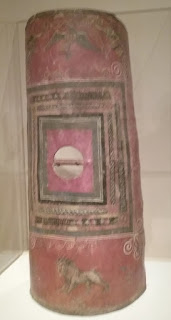 This was found in the ruins of a tower that collapsed under attack in the year 256. Note how curved it is. This is from the Yale University Art Gallery.
There are two winged furies bearing wreaths at top flying toward a wreathed eagle clutching an orb in its talons. At bottom is a lion striding between two stars.

It is not known if the shield design is for the legion or just the cohort. 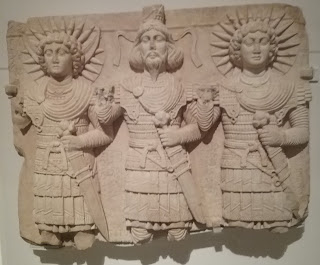 Portrait of Bat’a, late 2nd century or early 3rd century Palmyran woman of wealth, likely for her tomb, from the Grenoble Museum. It seems to have been made in her lifetime and is a portrait. 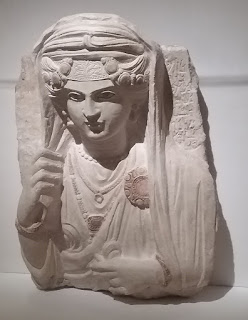 I have caught a fever. The cure might be acquiring Roman and Parthian DBA armies. To make it worse, I am thinking of mounting 15mm figures on the bases intended for larger scales, so that a Roman legionary base would have two ranks of 6 each, rather than the 4 figures needed for a normal DBA base. Perhaps the fever will break and I’ll just get a normal DBA force. The plan before seeing the exhibit was to get some Highlanders to play games of the ’45 with Rebels and Patriots.