A couple weeks ago I hosted the first face-to-face game for the Fencibles since February 2020. It was a small gathering, Bill and Jay with me as the umpire, since the rules were new to all of us. The next day a death in the family sent my wife and I to Florida. We returned a week later.

The belated report on the game follows, with less detail than usual. It was our first game of Bonnie Blue Flag, a set of tactical rules for the American Civil War. Our usual rules for the 19th century are Bloody Big Battles, grand tactical rules where the basic units are brigades or divisions, even small corps. BBB works just fine at that scale. A couple attempts to use battalions as basic units have not scratched that itch. Bonnie Blue Flag sounded interesting. I purchased a copy, typed out a simplified QRS that only had troops for the first scenario and set up the extremely spare table. 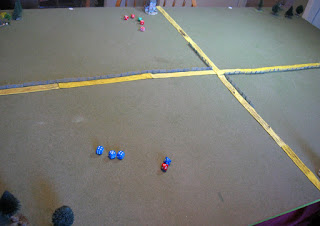 I shortly added a couple fields that had no tactical importance just to dress up the table a bit. The scenario is designed for 28mm figures in units 12 inches wide. I substituted 36 figures in 15mm scale to get the same footprint. Each side had a brigade of 4 infantry regiments and one artillery battery. I decided to name the units after a pair of brigades that tangled on the first day of Gettysburg, since I had that order of battle at hand. Dice assigned Jay the role of Union CO Cutler and Bill as Confederate brigadier Davis, nephew of the Confederate president. Can you say nepotism, kids?

But first we sat and talked for quite a while, since we had not been together in person for well over a year. Bonnie Blue Flag has a game system where you fire at and/or melee with enemy units. You don’t roll dice. The target checks morale with percentage dice. If they fail, another roll with varying numbers of D6 (based on target unit class) decide how severe the penalty is. Losing the initial percentage roll with a really low roll removes the testing unit immediately, no further checking needed. 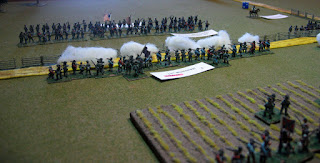 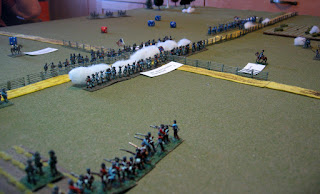 Once we got started, both sides advanced on the crossroads, the objective of the game. Jay put some fire into the Confederates. Bill responded by rolling 80s and 90’s, shrugging off all Union firing. We broke for dinner and more tales of how we had fared during the lockdown. By the time we returned to the game, Jay had to head home. I took over his Union brigade. The photos are now from behind Union lines.

Bill started out rolling high and ignoring Union fire again. I proceeded to roll low and fail morale. My one veteran regiment failed morale and for severity managed to roll a total of 4 on 3 D6. Back went the regiment with lots of hits, enough so that Cutler rode over and resuscitated the unit from his personal stash. One of the two veteran Rebel regiments, the 11th Mississippi, charged the experienced 56th Pennsylvania and a prolonged melee broke out over a fence lining the road. 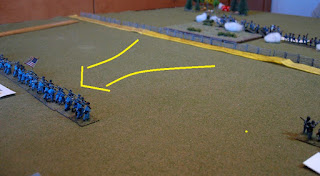 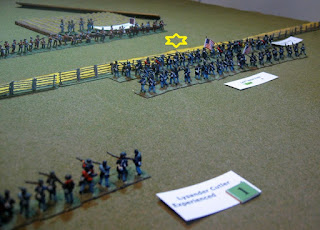 And then disaster struck. The 11th Mississippi needed 50% to pass morale and rolled 4%. The hitherto unscratched regiment vaporized, stunning both of us. On my left, an experienced Union regiment fell back in some disorder but remained on the table. A few more turns saw the larger veteran Union artillery drive the Confederate battery back. We ran out of time. The game was officially a tie, though the Rebs were closer to the crossroads while the Union had more troops on the field. 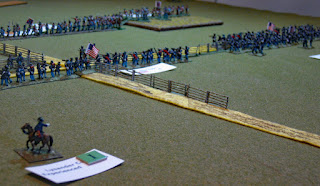 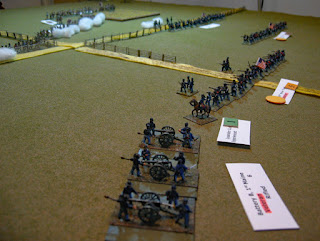 I find the skirmisher rules quite interesting, and simple. The new Napoleonic rules Shadow of the Eagles has simple skirmish rules that are somewhat similar. The sudden death rules for low rolls are breathtaking. Reading about them was one thing. Having a crack unit disappear was another. I’m not sure how I feel about that.

Edit: we played 10 turns in a little over 4 hours. Part of this I blame to ring rust, it having been a long time since we played a miniatures game. The guys had trouble playing the turn phase by phase, wanting to jump ahead for some units. I'm sure we could play this faster, but am not sure we'll do this again.

I’m still dealing with the death of a family member, so no game is planned right now, but so far I think the next game, whenever that is, will be a simple scenario of Shadow of the Eagles.

A number of gamers were locked in their homes for 15+ months. They painted up swarms of figures and posted the impressive results. My puny output is detailed below. I have 24 French light infantry Voltigeurs in 15mm scale, wearing the 1807-1813 uniforms. I also have a 15mm scale model of Captain Lienard de Beaujeu, who figured in the first large battle of the French and Indian War.

He led the 900+ French and Native warriors against Braddock’s 1400 British regulars and colonials at the battle of the Monongahela, July 9, 1755. Beaujeu, gone native, was dressed and painted like an Indian warrior. The only parts of his French uniform he wore were his cocked hat and his gorget, a small piece of ornamental armor hanging from his neck. He was instrumental in getting the battle started but was killed early on. The British and colonials were utterly defeated. Braddock was killed. His colonial aide, one young George Washington, escaped with some bullet holes in his uniform. I’ve been looking for a figure of Beaujeu for years.

I ordered a number of packs from Minifigs in England, but the parcel went astray during the early pandemic foul-ups of the US postal service, between workers falling ill and sorting machines taken offline. I told Minifigs that the pack I most missed was the one of Indian leaders, which included Beaujeu. They generously sent another of that pack and here he is. The sculpting on the figure is excellent. 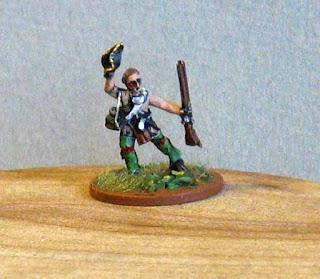 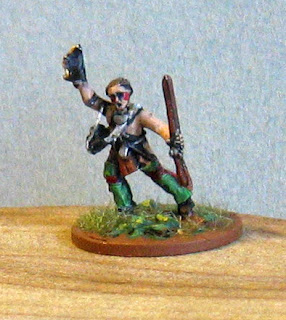 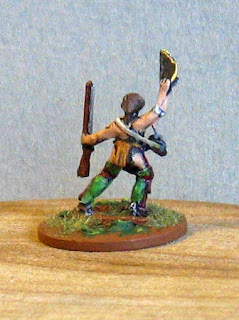 I also ordered a couple packs of Voltigeurs from Khurusan Miniatures. Many rules for the black powder period say to space skirmishing units at double the frontage of close order units. I find this has two issues. First, they don’t look that good. Second, they inevitably end up packed almost as closely together as close order units, gaining the advantage of being a more dispersed target while not really being dispersed. My solution is to put skirmishers on a base twice as wide as close order units. It looks better and prevents the magical bunching of skirmishers. I assumed the impending lockdown would last some weeks. Once the French/Indian officer was painted, I began working on the light infantry. Partway into this, the magnitude of the pestilence sweeping the city became apparent. I live in a large high rise building that has some 400+ apartments. I decided it was not the ideal place to sit out the plague. My wife and I fled to her family’s cottage on the coast of Maine. Tin soldiers and paint stayed behind

We returned for the summer of 2020. The infection rate had abated a good deal, but my mind was not on the hobby. The little tin lads languished. We returned to Maine for the winter.

In the spring we came back twice to get our vaccinations. During the second trip, my spirits rose and the painting was finished. We came back to town in June and I managed to base the figures, hit the bases with some Golden modeling gel and sand, and then paint the bases. The results are below. I am responsible for the semi focused photos. 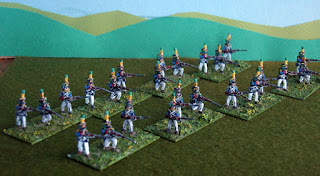 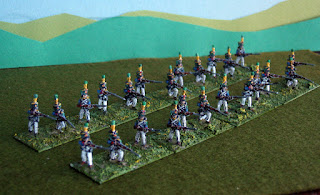 Newton was quarantined for two years. He produced his theory of gravity. In 15 months, I painted the small number of figures you see here. I also did a number of drawings and cartoons, but those do not relate to the hobby. The blog did get some posts over that time, including a couple matrix games of Alexander Hamilton at Yorktown. The second game did become a tad silly at times.

As we return to something resembling normal, there will be more posts on this blog. We had a face-to-face game a couple weeks ago. I may get around to posting a report of that.

Stay safe, people. It ain’t over till it’s over.