Tales of the World Wars

Due to the massive demand from my last post (thank you, Mark), I have posted these recollections of stories told me back in the 60s and 70s.

A bicycle accident put me in the hospital when I was just in my teens. For a week the guy across the aisle from me was an old guy (about the age I am now), a retired Italian immigrant.

He was born and raised in Trieste, back when that was the major Adriatic port of the Austro-Hungarian Empire. The second story of the houses were larger than the ground floors and overhung them. He told of shinnying up between the buildings as a kid to poach pies left out to cool on second floor window sills. He said if he’d slipped, he might have been killed.

In 1914 he was drafted into the army and put in a battalion of Italian-speaking troops. They all had to learn 50 words of German to understand their officers. Needless to say, they were deployed on the eastern front against the Russians rather than against the Italians in the Alps.

One of the minor army punishments was up-binden. They stood you up on a barrel with a sturdy post behind. Your wrists were tied together behind you to the post. Then the barrel was kicked out. If you passed out a bucket of water was thrown to awaken you. Miscreants were sentenced to this for an hour or two.

Our guy deployed on the Eastern front. He was captured in 1916. It was likely during the Brusilov Offensive, when the Russians captured some 400,000 troops. A model prisoner, he was released in St. Petersburg to be a house servant for a wealthy family. When the Bolsheviks seized power, the family lit out. They sewed some jewels into pillows and told him to take care of them since they’d be back soon. He thought otherwise and told the local Bolsheviks about the jewels. This put him in good with them. He got along fine with them. Some years later he returned to Italy – Trieste was now the easternmost city in Italy and no longer as important a port. He evidently acquired some Bolshevik politics and worked as a labor organizer. When Mussolini came to power, he made his way to New York City, leaving Italy and his radical days behind.

This guy was with an acquaintance I met in a bar in the late 60s. He told me the tale of the hyperinflation, when workers were paid daily before lunch and everyone rushed out to buy food before the prices went up. (see the previous post)

He fled to Switzerland since the Nazis were hunting for Jews. He was an illegal alien. He said the Swiss authorities weren’t looking too hard for him but he had to keep a low profile to avoid repatriation/extermination. He did various odd jobs but his most dependable source of income was the Swiss Army. Back then (maybe still?) every Swiss man of military age had to report for a week of training every year. Guys who didn’t want to go would send him instead. In return they let him pocket the week’s pay from the army.

I asked him if he thought fascism could happen in the US. He said it could happen anywhere. But it might be more difficult here. I asked him why. He said in Germany, if you were well dressed and had a commanding voice, you could walk into a train station and announce everyone had to board the first car. People would line up. If you tried that here, someone would ask who the hell you were. 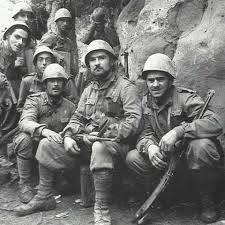 In the mid-70s I was in Florence, Italy, enjoying my first trip over the pond. Dining outdoors at a trattoria, I met a local guy who spoke excellent English. It soon became apparent why.

He’d been drafted into the Army in the Second World War. He was in the Trieste Division, though he was a Florentine native. He was sent in a draft of 3,000 reinforcements across the Mediterranean. The RAF intervened and sank the whole convoy. Later I found that the Ultra code-breakers knew when every convoy set out. He was in the water for a day before Italian Navy destroyers picked up the 300 survivors. I assumed they took them back to Italy. Oh no, he said, straight across to Africa and from there to the front. They settled in just in time for Second Alamein. He was captured by Australians and remarked how big they were. I’ve known one Australian and one Kiwi, both very big men. He was shipped to England and then on to the US. Well behaved, in time he was sent to the Pacific where he helped build airfields on Okinawa. That’s why his command of English was so good. He didn’t get back to Italy until 1946. 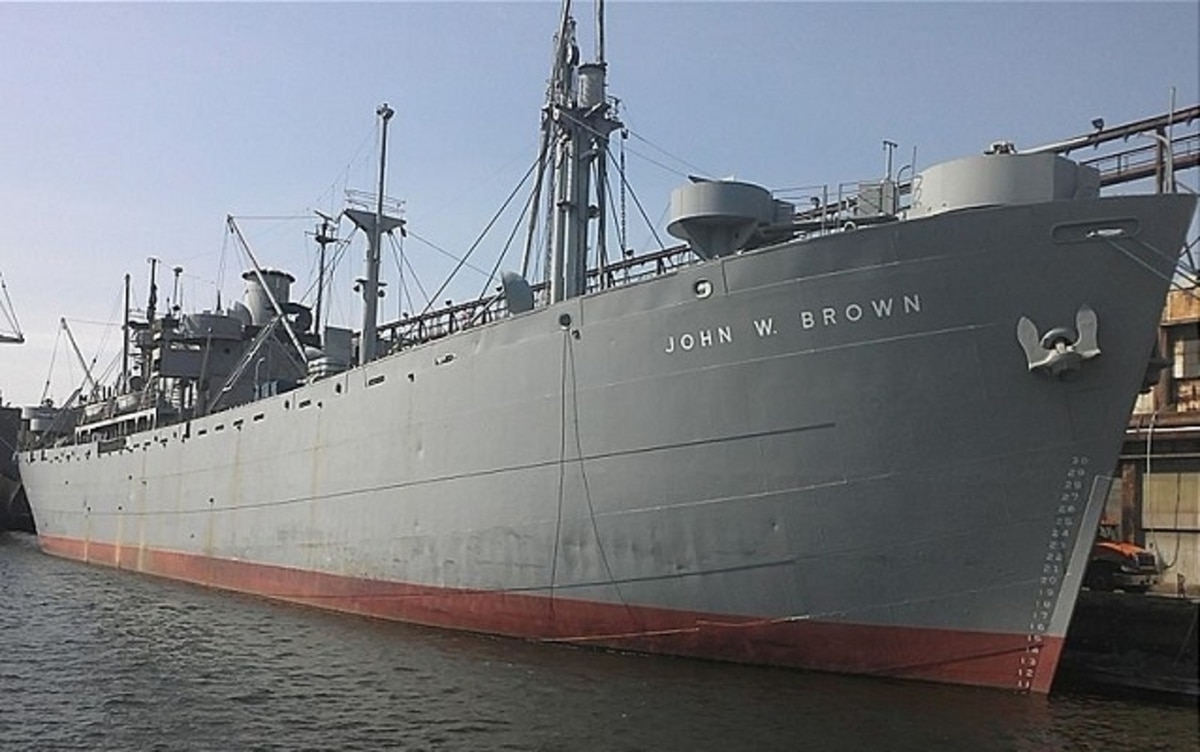 He was a cook on Liberty ships. (Later in life he was an executive chef at a large Long Island restaurant.) After each meal he dumped food scraps over the stern. Several large sharks tailed his ship for the scraps. One night the convoy was under attack, I assume by a wolf pack. He was off duty, since dinner had been served long before. He lay in his bunk, below the waterline. He kept hearing explosions. He eventually fell asleep. In the morning he arose and prepared breakfast. Afterwards he went to the stern with scraps. The ship that had been behind his in the convoy was gone.

Once in the Caribbean, he was out on lifeboat drill with others of his crew. They were out of the harbor when a U-Boat alarm sounded. There was an anti-submarine boom that started to close. He and his boat crew had to row like mad to get back into the harbor before the boom closed. Once closed, it might be 24 hours before it opened again. He said it was a close call, and exhausting.

He worked on Liberty ships, wiping down the boilers. It was the lowest job in the engine room. He did tell me one story. He went to Murmansk twice. He was walking in the town when a German plane appeared at very high altitude. The Russians wheeled out a very large anti-aircraft gun and shot down the German. He was mightily impressed by the size and accuracy of the Russian gun. My grandfather also made it to Murmansk twice.

A dear friend of mine was brought up on Aruba, where her father worked for the Esso refinery. One night in 1942 a U-Boat surfaced and shelled the refinery. In 1939 or 1940, the light cruiser HMS Ajax put into harbor after tangling with the German pocket battleship Graf Spee. My friend, accomplished at the diving board, was called on to do a diving exhibition for some of the crew. That gives me a most tenuous connection to the Battle of the River Plate.

The German Hyperinflation of the 1920's

People I know have worried themselves about hyperinflation on the German model affecting us in the near future. They aren’t interested in my views since I disagree with their version of reality. I instead worry that the pandemic may not be contained. But their concern generated the following piece. It’s not about wargaming but is about 20th century history. I hope you don’t mind this digression.

The German hyperinflation of the 20’s was not caused by voluntary government spending, even though all nations involved in World War One (or as they called it, the Great War, unaware that the sequel was in the works) incurred massive debt. Germany’s problem was the vengeful Allies, who had lost millions of dead soldiers in the first industrial slaughter. They intended to hobble Germany enough so it could not rise again. The reparations were so onerous that the new, unstable Weimar government printed money in order to pay off the Allies with worthless cash. They also ruined their own economy. They printed so much that the ink devalued the paper. Artists used currency for collages since it was cheaper than blank paper. Germany (and their allies) had also gone through starvation caused by the British naval blockade. It continued for 6 months after the shooting stopped.

None of this applies to the United States. We do indeed have serious problems. But we have not been utterly defeated, had our government overthrown or had the majority of our population experience starvation, though too many have gone hungry. Foreign troops have not occupied a major region of our country to ensure we pay them off.

It should be noted that the peace treaty of 1919 wasn’t as harsh as that imposed in 1945. Germany was not broken into two nations. The defeated leaders were not put on trial to be executed or imprisoned. The victors did not impose governments on the defeated Germans. But the victors of 1945 knew better than to hamstring the defeated with enormous reparations. For one thing, it hadn’t worked.

There are other models of history other than the rise of Nazi Germany, but those don’t generate endless TV documentaries. Many happened before there was extensive film footage. The stories are often more complex than the tale of the Third Reich. Simpler stories make for more entertaining TV.

Back in the late 60’s I met a German Jew who lived through the hyperinflation. He told me those people with jobs were paid daily, before lunch. They would rush out and buy as much food as possible since the prices would rise by quitting time. This guy escaped the Holocaust. He fled to Switzerland where he lived as an illegal alien for the duration of the war.

I have over the years talked to people with interesting stories, who lived through WWI and WWII. If you would like to hear my versions of their tales, please indicate so in comments below.

For that matter, if you prefer that this blog stay away from such tales, you can state that too.

I do intend to avoid commenting on current politics.