James "Old Pete" Longstreet and the Lost Cause

James Longstreet
Many histories of the American Civil War blame Old Pete for the Confederate defeat at Gettysburg, in particular a missed opportunity on the second day of the battle. A good number of Confederate generals agreed on this after the war. If one read only these history books, one would think the case was open and shut. But the creation of the Lost Cause and Longstreet’s actions after the war have a lot to do with the chorus of blame laid on him. 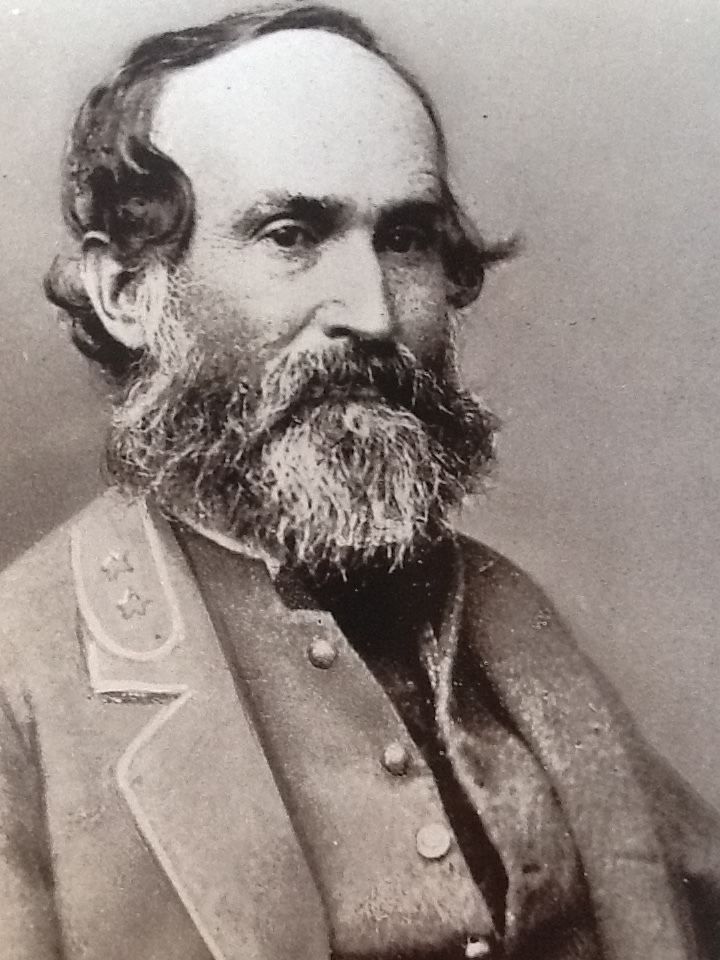 The Lost Cause was pretty much created by Confederate General Jubal Early. The basics of it were that General Robert E. Lee was just about a saint and a military genius, the martyred Stonewall Jackson was indeed a saint, the war was about defending the Southern way of life rather than slavery, and Longstreet was a prime reason that the war was lost. The Lost Cause made the case that the defeated Confederates had fought for honorable reasons. It bolstered the white southern reaction against Reconstruction, Black suffrage and any whites who went along with it. Northern whites who moved south and backed Reconstruction were termed carpetbaggers. Even worse were southern whites who backed the new system and were termed scalawags. Longstreet was the most prominent scalawag of all. Herein lies the root of his fall from Confederate grace.

Longstreet was a South Carolinian. In Robert E. Lee’s Army of Northern Virginia, officers from Virginia were first among equals, and more equal than the others. These officers were proud and prone to quarrel. Lee early on decided to divide his army into two corps, one led by Stonewall Jackson, the eccentric and highly aggressive soldier-professor from Virginia Military Institute. The larger one was led by Longstreet, a life-long soldier in the US Army who had resigned his commission after Fort Sumter and joined the Confederacy. Lee called Longstreet his old war horse.

At the 1862 Battle of Second Bull Run Longstreet’s corps made a powerful attack that broke the Union flank.  Longstreet was methodical and slow, but he hit like a mule once ready.

At the Battle of Antietam, Longstreet and his staff had to man two abandoned Confederate cannons to fool tired Union soldiers into thinking there was still resistance at that part of the line.  The Confederates hung on by the skin of their teeth before retreating back to Virginia. 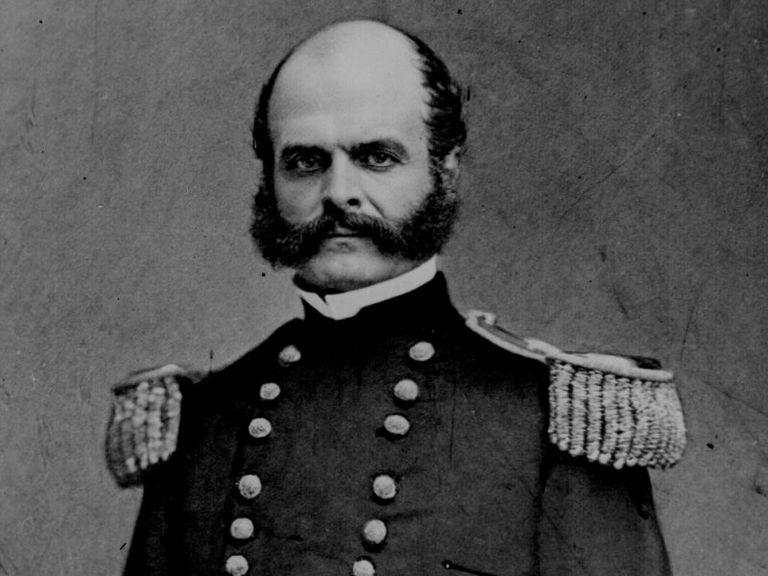 In the Spring of 1863 Longstreet was sent with part of his corps in a undecisive campaign in coastal North Carolina. Meanwhile, Lee and Jackson had their most famous victory at Chancellorsville. Jackson was accidentally shot by his own troops. He lost an arm, infection set in and he ascended into the pantheon of Confederate martyrs.

With Jackson gone, Lee decided to divide his army into three corps, one led by the methodical, dependable Longstreet. He promoted two others, Ewell who was nearly as eccentric as Jackson but cautious and a bit over his head, and Ambrose Powell (AP) Hill. Hill had been a brilliant if difficult and argumentative division commander, but would find corps command a promotion too far. He also suffered from increasing bouts of the venereal disease he’d contracted from a New York City prostitute back when he was a West Point cadet. Hill and Ewell were no replacements for Jackson.

The unplanned battle of Gettysburg started when Hill sent some troops into the town “looking for shoes”. This was unlikely since other Confederate troops had been already been there days before and could be guaranteed to have cleaned out any shoes on hand. Hill was looking for a fight against Lee’s orders and he got one. Hill and Ewell managed to beat the Union troops on the first day, pushing them back through the town with heavy losses on both sides. Ewell cautiously decided against a late day attack on the new Union position. The Yankees used this breathing space to dig in; reinforcements streamed in during the night.

Longstreet arrived early the next day with two of his three divisions. Lee wanted him to attack the Union left. Longstreet wanted to go deep around the Union left and set up behind them, forcing them to attack him. Lee vetoed this and ordered an attack. Longstreet, sulking, went ahead. His attack was delayed when his first approach route was found to be under Union observation. Finding an unseen route took some time. When the attack finally went in, the Union left was in serious trouble. Hill and Ewell failed to coordinate, allowing many Union troops to move to the threatened sector and finally hold off the attack.

On the third day Lee reasoned that both Union flanks had been pushed hard; their center must be thin. But by this time many of the troops sent to the embattled left flank had returned to their original positions. Longstreet was ordered to attack with his third division led by George Pickett, along with some of Hill’s troops who had taken serious losses on the first day of the battle. Longstreet said it was hopeless. Unable to change Lee’s mind, he made the attack under protest. Pickett’s division of Virginians managed to briefly break into the Union line but the attack was a massive failure, with nearly half of the attackers killed, wounded or captured. What had been a bloody stalemate was now definitely a Union victory. Longstreet was furious at the loss of his troops and angry with Lee.

The Lost Cause blames the loss of the battle on Longstreet on the second day. Hill and Ewell are absolved. AP Hill was shot dead near the end of the war, getting him onto the Confederate martyr list and likely freeing him from a horrific, lingering death from his disease.

Longstreet went on to go west and break the Union center at Chickamauga. At the 1864 Battle of the Wilderness, he saved the Confederate right from utter defeat, then flanked and drove the Union troops back. He was accidentally shot by his own troops, a few miles from where Jackson had been hit the year before. Badly wounded, he was out of action for nearly a year, returning to the army just before the end of the war.

After the war he joined Grant’s administration. He had been the best man at Grant’s wedding before the war. Longstreet and a few other Confederate officers supported Reconstruction and Black suffrage. Longstreet was the highest ranking one. He criticized Lee for Gettysburg, breaking a serious taboo. And he said he recollected much of the talk before the war had been about protecting slavery. All of this ensured that he was the target of much abuse. He was in charge of the Louisiana police and militia, many of them Black, when the White League stormed New Orleans in 1874. Longstreet tried to reason with the armed League. He was hit by a spent bullet, dragged from his horse and captured. The 8,000+ strong White League charged and routed the 3,600 police and militia, with over 100 killed or wounded. Later, Federal troops were called in and the White League backed down. After Reconstruction was terminated and the Black vote suppressed, the White League erected a monument to the rising with a plaque explicitly praising white supremacy. It was replaced by a bland, anodyne plaque during the later 20th century. The monument was removed in 2017 along with 3 other Confederate monuments by Mayor Mitch Landrieu.

Longstreet continued to defend his military decisions and his post-war politics until his death in 1904, having outlived most of his Confederate peers. I submit that had Longstreet joined in with the Lost Cause crew he would not be blamed for losing that battle, or the butt of much of the other rancor he received.

I will leave the final comment on who lost Gettysburg to the marble man of the Lost Cause, Robert E. Lee. Upon meeting the shattered survivors of Pickett’s Charge, he told them over and again, “This is all my fault”.

Norm’s blog http://battlefieldswarriors.blogspot.com/2021/05/shadow-of-eagles-new-napoleonic-rules.html has been trying out new rules with a simple small scenario. A regular infantry unit advances against another such unit on a hill. It fires once and charges. I decided to try this same thing using the free 321 Fast Play Napoleonic Rules 5.0. they can be found here https://chasseuracheval.blogspot.com/p/321-fast-play-napoleonic-rules.html

Here in Maine, away from most of my stuff, all I have is some 15mm Seven years War figures. So the Prussian IR 13 Itzenplitz decided to storm the gentle hill held by Austrian IR 29 Loudon. Both are rated as regular, no national modifiers to complicate things. Both have morale of 3, needing to score that or less to get hits firing or in melee. Then those hits need 4+ to convert to disorder. Units roll a die for each stand not disordered. When all stands are disordered, the unit routs and is removed from the table, first dealing out disorder to nearby friends. The last hit from fire needs to be checked again before the unit routs. Defenders losing a melee must check morale; if they fail, they rout.

This test presumes the attacking unit is in control. Even with a competent division CO, there is a 1 in 3 chance that the unit will not be in control; hence unable to advance. It would bog down in a firefight.

On to the first test. Note that I have extremely limited terrain here and this is on the dining room table. 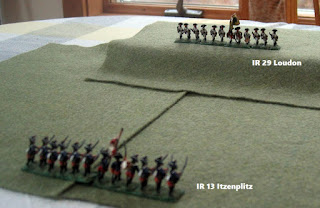 Note the attacker gets to move and then fire first. The designer says in a game with combined arms the defending artillery will get more licks on the attackers as they close. No big guns here though. 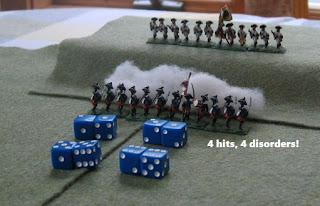 If a disorder result from shooting would rout a unit, the shooter must try to convert again. 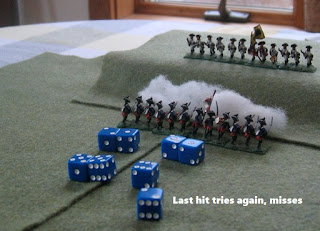 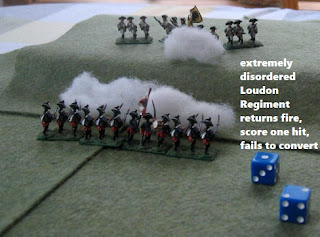 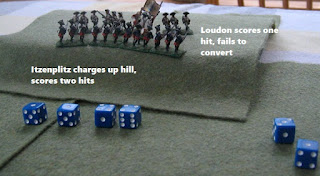 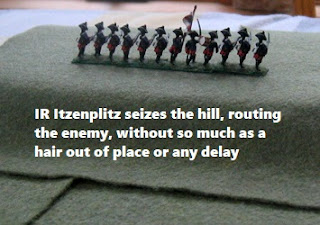 Think I left some conversion dice out of one of the pictures. Well, that was fast. And unsatisfying. Dice can do the strangest things. The major leading that battalion - I think his wig is on fire!

It was short, so here we go again. 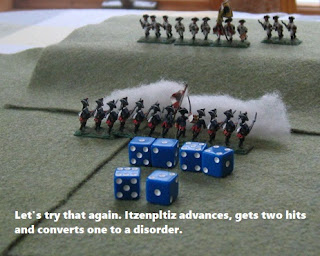 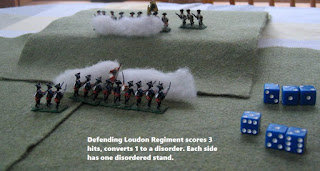 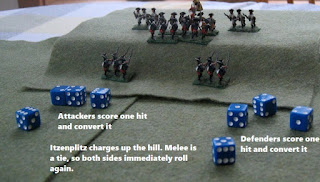 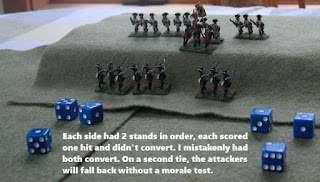 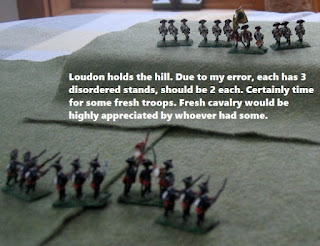 This result was more satisfying, two rather beat-up units and an opportunity for whoever has reserves.

The rules have some interesting features. I find them a tad too laconic and would like more explanations, perhaps even an example. But the price is right. So far, I plan to stick to Shadows of the Eagles, Keith Flint’s new set of rules. Those do require coughing up some dough. But the combat resolution is faster. Shadows has all units the same size, where 321 allows large, normal and small units.