We returned to the modified First Bull Run scenario yesterday using Bloody Big Battles rules and our 15mm ACW armies. I played the Union McDowell, seconded by Ken as and Bill played Confederate Joe Johnston. Jay arrived later to be given command of the reinforcements. The has lost every game we’ve played so far (as they did the real battle) but I thought perhaps a really aggressive try night succeed. The games have all been fun. The needs control of three of the objectives below for a win, two for a tie. 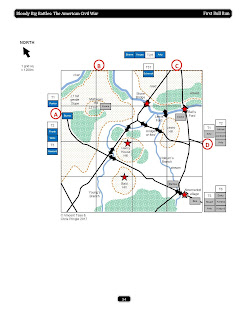 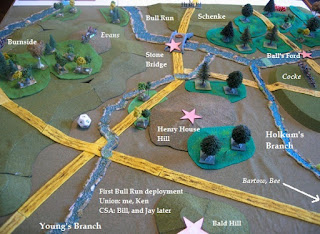 Confederate leaders and units will be in italics in the text and the photos. Burnside advanced against Evans while Porter rushed down the road towards New Market in column, gambling that Bartow and Bee would not catch him in that fast, vulnerable formation. 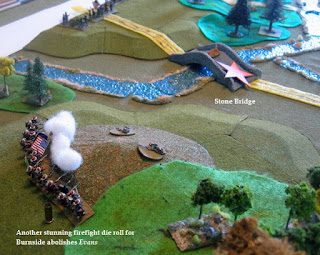 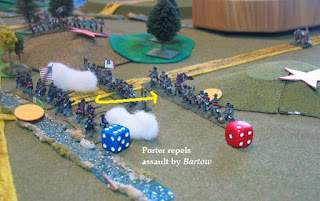 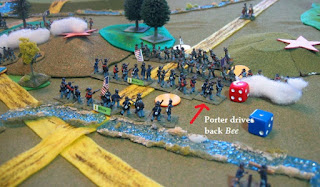 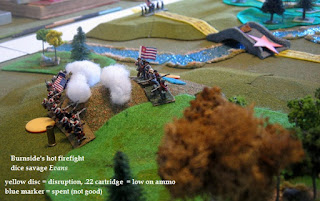 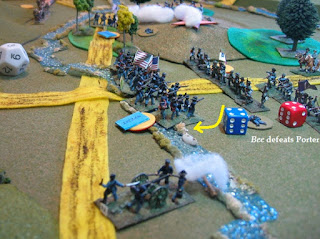 Bartow and Porter were both spent, and Wilcox soon joined them. 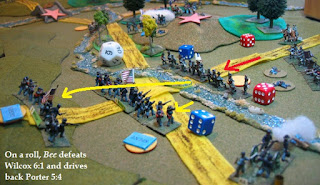 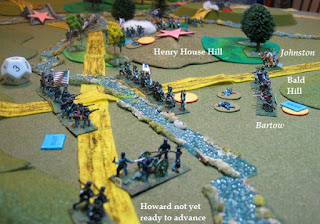 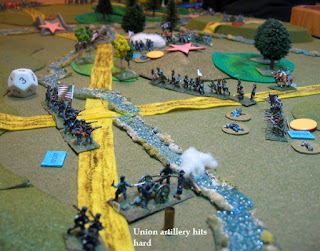 The picture below has an error: Howard did eradicate Bartow, and then defeated Bee, but the artillery was a new arrival and not involved in the charge. was hit. 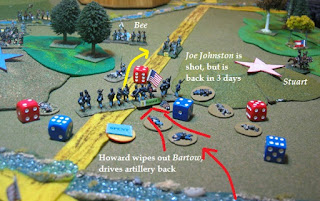 Burnside stormed onto Henry House Hill. Off camera to the left, Schenk’s brigade occupied the and we had the makings of a tie, one objective away from a victory. Since most of the Union brigades on the right were spent, taking another one was highly unlikely. We would do well to hold what we had. We broke for dinner, with Ken’s bread, Jay’s wine and Bill’s dessert. The next part of the game is a little fuzzy, perhaps due to the wine. 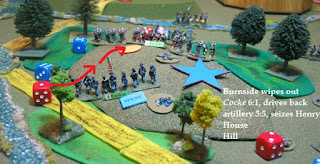 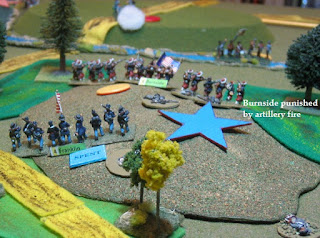 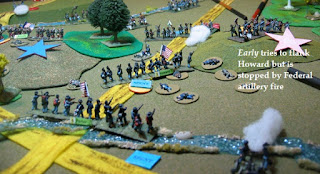 Ken had finally rolled high enough to activate his division. One unit captured the , another had the misfortune to encounter Stonewall Jackson’s brigade. 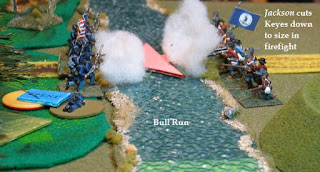 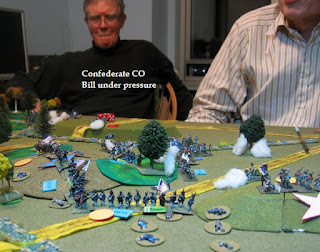 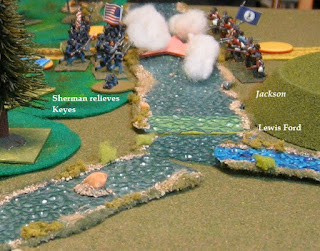 On the last turn of the game Burnside’s spent brigade headed off camera to the left. I had been planning on giving them a unit award before this. 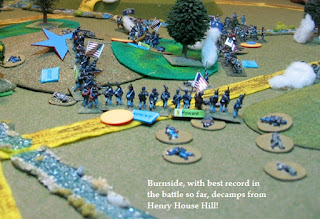 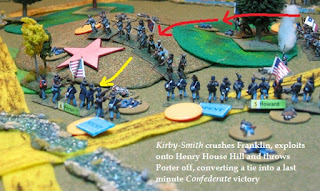 At the absolute last moment Kirby-Smith had stolen our tie and produced a Confederate victory. We had played 9 turns in 3.5 hours, and all had a good time. It was unusually bloody. Most of our replays result in 6-7 infantry bases lost per side with the odd cavalry or artillery base thrown in. This time, the lost 11 bases (of 37) with 2 run off. Confederate losses were even higher, 15 infantry bases (of 35) with3 run off, Stuart’s cavalry dispersed by artillery in a late attempt to charge Schenk’s flank, and Joe Johnston down with a flesh wound. Curiosity had us check Stuart: his horse was shot and he escaped on foot. We nearly ran out of spent markers. We all remarked that the actual green armies at this battle would have stopped going forward or even routed with these losses. But hey, it’s a game.

I really liked the feel of the game when most units were spent, making fresh troops more potent. Jay opined that it was a fun game but the Yankees have a hard row to hoe. While appropriate since the did lose that day, we questioned how to make it a closer game. Ken thought perhaps no die roll to activate ’s division, just let them march on the third turn. I guess I should hit the books and see when finally did let Schenk advance. Or else just say it goes forward around Noon. A good time was had by all.

Posted by vtsaogames at 8:26 AM No comments: