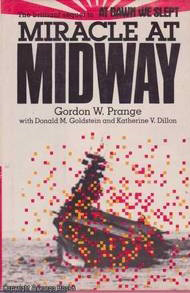 This isn’t a new book, published in 1982. I read it recently and was quite pleased. Prange did serious research. He passed away before it was finished but his assistants Donald Goldstein and Katherine Dillon completed the book. I already knew the story of Midway and had played the venerable Avalon Hill game in days of yore but this book covers the story in greater detail than anything else I’d read on the subject. Many of the participants were interviewed, including a number of key American and Japanese naval officers. There is detail about the breaking of the Japanese code. It required a lot of hard work after it was broken, since the Japanese changed things from time to time. Intelligence officers had to be on guard for planted false information. In the end they got the goods and Admiral Nimitz believed them, both being required to give the outnumbered US Navy a chance.

The combat is covered in detail, from director John Ford being wounded while filming the air raid on Midway Island, to a USN torpedo bomber pilot seeing his squadron CO fly past desperately trying to open the canopy of his burning plane, to the Japanese officer blown so high off the deck of his burning carrier that he broke both ankles when he came back down. The disastrous US torpedo attack, immediately followed by the fortuitous unplanned convergence of dive bombers over the Japanese carriers shows just what a miracle occurred.

As mentioned in a previous post, the Japanese war game with forebodings of the battle is also covered in some detail. I have the highest praise for this book. The only screw up is the order of battle in the appendix. The carrier Soryu is missing, although it was frequently mentioned in the text. I suspect a typo. It might only be the McGraw Hill edition. That aside, this book will be a fine addition to your collection. 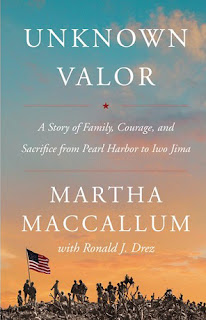 In another category is Unknown Valor, a more recent book about WWII in the Pacific by Martha MacCallum, a Fox News anchor. It is the tale of combat veterans of the WWII island-hopping campaign, including a family member. Workmanlike prose isn’t enough to deter me from reading military history. I liked to attend dances in the good old days a few months ago, before the current pestilence hit and enjoyed reading about the battle of the fleet bands at the dance the Saturday night before the attack on Pearl Harbor. It was a nice touch to know what songs they played.

Then the attack was covered in few short pages. She said all of the 300+ Japanese planes were fighters. Thinking it was a typo, I read on to find this repeated a page later. No torpedo bombers, no dive bombers, all fighters though they dropped bombs and torpedoes. I wasn’t demanding that the make and models of the planes be identified, but calling them all fighters stuck in my craw. Next error was saying that nearly 4,000 Americans died and more than half of them were entombed in the Arizona. The more usual number of dead cited in the attack is 2,400. I’ve been to the Arizona Memorial which says 900 sailors lie below. That’s nearly half of the dreadful total but not more than half. When that number of errors crop up in a few pages, my history geek antennae go on full alert. I picked a spot at random much further along and found an eyewitness account of a Japanese attack that saw 5 enemy tanks knocked out. Then the author stated that the attack was repulsed at the cost of 5 tanks and 298 dead. I gathered the casualties mentioned were Japanese but the wording implied that the cost was to US forces. Finding gross errors in the information I know well indicated that the book can’t be relied upon to be accurate. Workmanlike prose combined with questionable research is more than I can stomach. Down went the book without further reading. It meant a return to the nearly 1,000-page biography of Harry Truman I’ve been reading. It is short on combat (other than the political kind) but throws no suspect or clearly wrong details in my face.

Your mileage may vary, but I’d say give Unknown Valor a pass. Others obviously disagree with me since this book is on the NY Times best-seller list. I suspect the old-fashioned patriotic style of the book has much to do with it.

Posted by vtsaogames at 5:36 AM

Thank you for the book reviews. Always interesting to see what people are reading. I will look for the Midway books.