This is the first toy soldier game I’ve managed since the pandemic hit. Long story short, I’ve been away for a while and upon return to the city various tasks awaited that had priority. They are now mostly done. I purchased the new pike and shot rules In Deo Veritas (IDV) and in time got to play the introductory scenario posted online, Boldon Hill 1644. The Scots Covenanters take on Newcastle’s Royalist Army.

The rules call for infantry and cavalry brigades mounted on 3” wide stands. Our figures are DBX style so I figured 4 stands of infantry in two ranks and 2 stands of cavalry, both 80 mm wide would be close enough. The introductory scenario left enough troops in the box for 2 more infantry brigades and 8 cavalry brigades. I can manage two of the smaller scenarios in the rule book if I borrow a few figures from other periods. The scenario calls for 4 X 4 space, which is good because the remaining 2 feet of my gaming table has other stuff on it right now. The bunch of hills on the Royalist position should really be one plateau, but with other stuff on the table I didn’t get a mat out. It’s not my best looking table.

Below you can see the starting lineup and early turns. My photos are not up to the usual because the new PC has Windows 10 and everything is a bit different than my old unsupported Windows 7. I had the hang of the old one just fine… You might note the Scots are not Scots. Hey, they're not WWII figures. 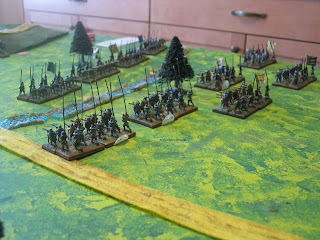 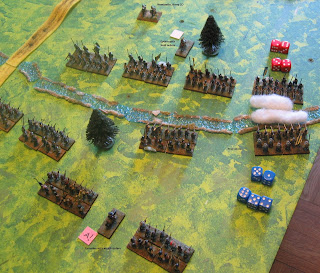 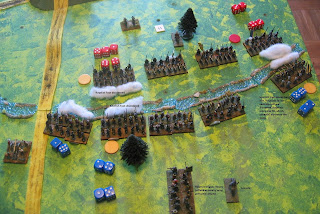 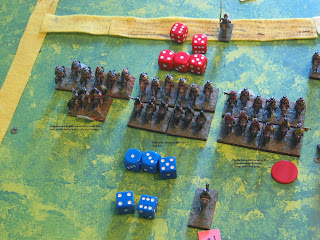 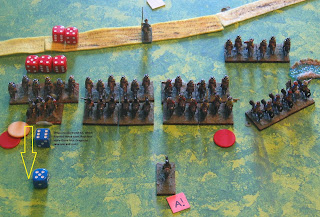 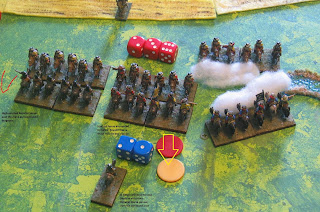 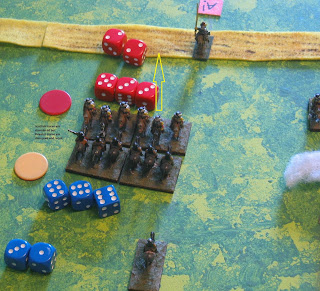 I came up with some problems. They may be explained in the rules somewhere but it has evaded me so far. I don’t see what happens when a combat result is scored against a routed unit. I decided it dissolved after making a rout move and possible running through friends. Also, routed companies (instead of brigades) are removed from the table after being routed by fire. The same if routed in melee? Makes sense but I didn’t do that yesterday. Another issue was officers are at risk if they are attached to units that take hits. But I had an unattached officer (D. Leslie, Scottish cavalry wing CO) that had routing friends run past him followed by pursuing enemy troopers. I decided he would test for a single hit and if not hit would relocate to outside the path of the pursuit, closer to the nearest friends. If hit he would be captured.
Another issue: units may only rally when they are beyond 4” of enemy and in control. The successful Royalist cavalry wing came apart at the seams since they invariably pursued routed enemy. The rules state that units pursuing off the table return once they have rallied back to sound status. I decided off-table troops could rally. But those on the table beyond reach of officers can’t. This led to Lucas riding alone through the battered Scottish cavalry line to gain control of his pursuing units while a disrupted unit remained in his rear without making any attempt to rally. Strange, but the resulting chaos sounded a lot like descriptions of ECW battles I’ve read. 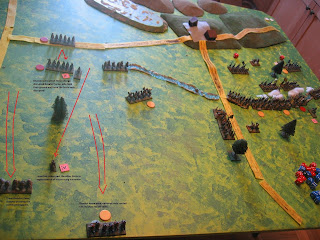 Things went badly for the Scots. Their dice were pretty cold, except the time two raw brigades whacked a Royalist brigade. 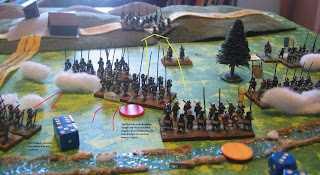 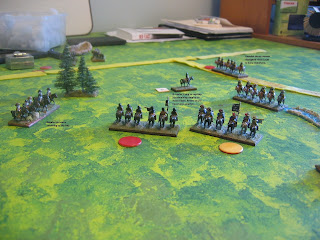 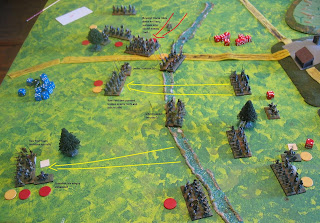 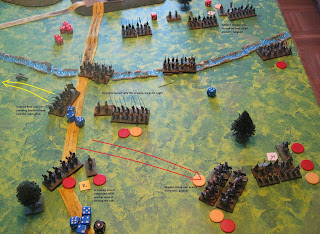 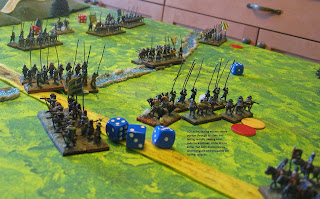 Scottish cavalry leader D. Leslie managed to pass his wing cohesion tests several times but eventually failed and became fatigued. Lumsden’s infantry wing followed suit and both were incapable of attack orders. Both soon became exhausted, even worse. Both Royalist wings became fatigued at the same time and no attacks were possible on either side. A. Leslie, the Scottish CO passed his first will test on turn 6 but failed miserably on turn 7 and called a retreat. I misread the pursuit rules and added a D6 to each side’s score. The Covenanters lousy dice continued with a 3 to the Royalists’ 6 and the result was a close pursuit/major victory. The Royalist dice finally went cold; one routing cavalry brigade was dispersed and the infantry wing leader was captured in the rout. After dinner I consulted the rules again and discovered no dice result was added. It was a limited pursuit and a minor victory. If the Scots had retained a single cavalry brigade in good order there would have been no pursuit and both sides would claim victory. Now there’s a reason to keep a reserve.

It took slightly under 3 hours to play 7 turns. The scenario called for up to 10 turns. It was the first time I’ve played the rules and spent some time going back and forth through the rules, in some cases only to find the pertinent data was on the 4-page Quick Reference Sheet. With practice I could get faster than 25 minutes a turn. I did enjoy the flow of the game. It produced a chaotic and exciting battle. I could have made better use of the commanding officers, who need to go about dealing with units that need commanding and /or rallying. As noted above, there are one or two small gaps in the rules. I’d really like to know if the designer is on an online forum somewhere so I could ask questions. A FAQ would be nice. Failing that, house rules can easily patch the small gap. I plan on playing the second version of Boldon Hill with In Deo Veritas, which includes an extensive set of enclosures for the Royalist foot to deploy in.  if time permits before we decamp again, I’d like to try the scenario with Steven Thomas’ rules for the period. Tilly’s Very Bad Day. I suspect IDV has more flavor and Tilly will go faster. In both cases rebasing will be in the pipeline for sometime in 2021 or whatever year this virus gets sorted out.

Over the years, I often found In Vino Veritas.