I invited Jay to a Saturday game as he has been unable to attend Thursday meetings lately. It was a test of Shadow of the Eagles, Keith Flint’s new work-in-progress Napoleonic tactical rules. I asked him play the British while I would lead the French in a frontal attack like Reynier did. If I was primarily going for a win rather than a test, I’d have a good number of the 4 Legere battalions present go into skirmish order. Instead they went forward in lines or columns. I had generally better dice, keeping the initiative for most of the game. The British regulars were rated as superior when firing. This did not apply to the 3 battalions that were fairly green (according to Hopton’s Maida), the 2/78th, 1/81st and 1/58th. 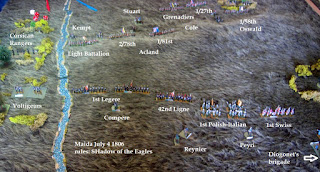 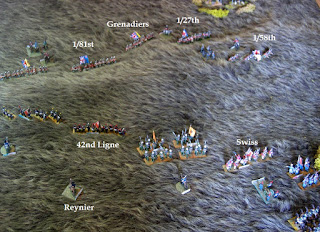 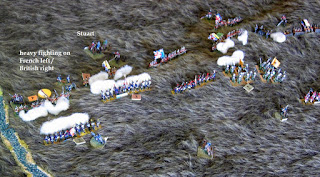 I thought the French were about to go under but continued to press the attack, like Reynier in the actual battle. Two things changed; the 23rd Legere began to demolish the British left and the French cavalry moved to the opposite flank and took out the victorious but badly shot-up British. 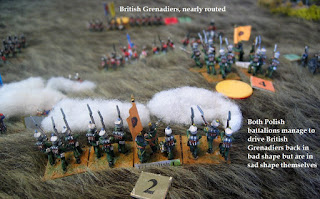 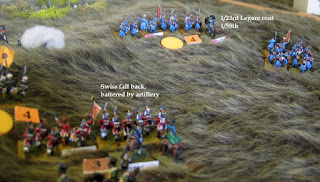 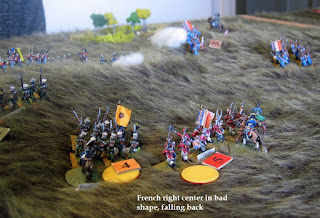 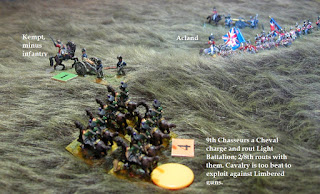 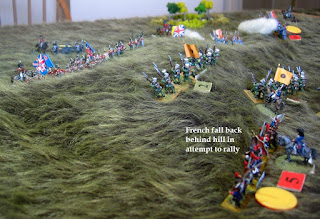 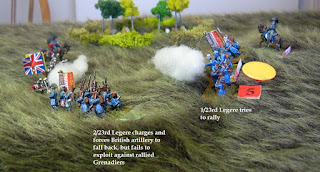 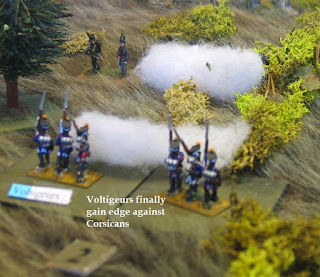 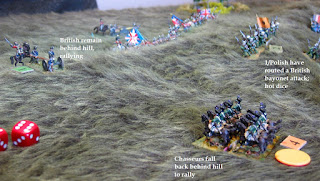 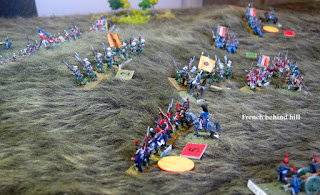 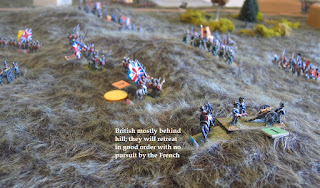 We were both too banged up to go forward. But the British had lost 4 battalions routed against the French 2. It was clear that the French would eventually rally enough to go forward again and now had a serious edge in numbers. Jay decided to fall back before that happened. The French response was “who will help us bury all the dead?”

We played 8 turns in 3 and a half hours. This was the first time we had played these rules. On one turn when a lot of charges were resolved we were back and forth through the rules. That turn was slightly over an hour. Charges after that were resolved more quickly since we knew the drill. We don’t think we made too many errors. At one point I thought a British battalion had routed but when moving it off the table we discovered it was the Grenadiers. Instead of routing they fell back in bad shape. They were rallied by Stuart (British CO) and went back into the line.

The usual result when breaking an enemy unit was that the friendly unit that had accomplished this needed some R&R before thinking of taking on other enemy troops. Seems right.

Each side got one inspiring brigade CO. Each one of them got to make a double move once in the game, without any great effect.

Glaring uniform errors: The Legere are line troops. The "Polish" are Nassau troops. I don't have Napoleonic Highlanders painted. The British are in Waterloo uniforms. The "Corsicans" are 95th Rifles. I think that covers them all. Hey, I didn't use any WWII troops.

Edit: things we did wrong. The gun crew was supposed to have run for cover with the nearby Grenadiers after firing if the chargers kept coming. We also didn't pay enough attention to the troop quality. That probably did more harm to the British.
Posted by vtsaogames at 7:27 PM

A French victory, great report with splendid minis and terrain...and a fabulous issue!

The playtest is much appreciated, as is the insight into how you represented the battle. I look forward to any questions or comments you might have appearing on the online group.

Did the British guns have no effect in this game?

One of the batteries had little effect, largely due to Jay overlooking it at a couple critical turns. I offered him a redo the second time and he said, no, mistake made. The second battery shot up the Swiss and sent them back in bad shape. Then the battery wheeled to face the open flank and was rushed by a Legere battalion. The French horse artillery didn't do very much.